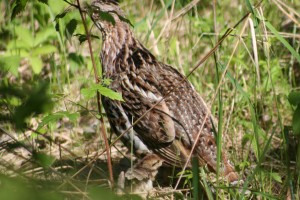 As I exited the outhouse this morning I was attacked by a wild chicken!
Actually, this overly aggressive bird was a protective female Ruffed Grouse. You can see one of the chicks at her feet.

With her tail feathers spread like a Thanksgiving turkey she made an aggressive charge, clucking loudly. If I hadn’t just finished my business I would have crapped my pants.

Standing completely still, I waited to see what all the fuss was about. Slowly, one by one, I quickly found out as 10 little chicks emerged from the grass and quickly crossed the narrow path that leads to the privy. With a watchful eye, the mother grouse urged them along into the safety of the woods.

It is the first time I have seen a grouse this year. Once my heart rate returned to normal and I was sure that the last straggler had made its way into the forest I headed back to the cabin and grabbed the camera. Guessing on the direction the family was headed, I carefully made my way into the woods and soon found them.

Keeping my distance, I did my best to get a photo of the mother grouse and at least two or three of the chicks together, but they were all spread out working their way through the grass in the underbrush. The photo above of the mother and one of the chicks is the best I could get without causing them too much stress.

We had family of eight around the cabin last summer. Hopefully we will see this gang on a regular basis also.