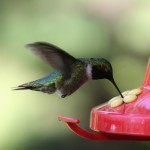 During a trip to Costa Rica in the 90’s I had one of those “I can’t believe this is real” moments. Hiking along a path in the cloud forest, I came upon dozens of hummingbirds buzzing around the flowers of a tropical plant. As the guide explained the different types, I became mesmerized by their beauty, grace and almost magical existence.

You can imagine my excitement when I saw a hummingbird for the first time at the cabin. It absolutely blew me off my feet. How did it get here? The poor thing must have gotten lost or trapped in a terrible wind current. How would it survive so far north?

The next day I called a friend who also has a cottage in this region and told him the amazing news.
“There is a hummingbird at my cabin!” , I announced before he even had a chance to find out who was calling.
“So, what’s the problem?” was his less than impressed reply.

Obviously, I had stumbled upon something much more common than I originally thought and let out a mental sigh of relief that I had not contacted National Geographic about my fascinating discovery.

I decided to do a bit of research on the migration pattern of the little birds and what I discovered is nothing less than spectacular.

The hummingbirds spend the winter in Mexico and Central America waiting for the flowers of spring to arrive in the U.S. and Canada. According to volunteer sighting submissions, the first birds usually arrive in the southern U. S. near the end of February and arrive in my area of northwestern Ontario in the first weeks of May.

I promptly bought a hummingbird feeder and put it on a branch of the large lilac bush that sits off the corner of our front deck. I mixed one part sugar with four parts of water and filled the feeder.

At first, there seemed to be little interest in the feeder and my anxiety began to build. Is it in the wrong place? Is there too much sugar? Maybe it should be sweeter. Is it too close to the cabin? Maybe it should be in a shaded area. For a week the birds avoided my new feeder and I was starting to get depressed.

Finally, one sunny morning, as I sat on the deck enjoying my first coffee, a beautiful ruby throated male arrived to drink. It stayed only a brief moment, then whizzed off towards the woods. A few minutes later it returned again.

Suddenly, like a fighter plane diving into battle, another male dropped into the scene and an incredible battle ensued. You can’t imagine my excitement and amazement.

The hummingbird wars had begun, at my feeder! For the next few weeks the camera clicked away endlessly, trying to get photos of my little warriors. The birds were not the only ones claiming rights to the feeder. As the summer progressed the wasps arrived and the hummingbirds were forced to share the sweet source with another enemy.

It was just like the scenes at the watering holes in Africa, yet instead, it was right here, live at my hummingbird feeder. Although my friend has become neutral to the presence of the hummingbirds at his cottage, I am sure the fascinating little creatures will provide us with a wonderful source of entertainment for years to come.

To track the migration pattern of the ruby throated hummingbird go to www.hummingbirds.net

Recommended Reading:
A Field Guide to Hummingbirds of North America