The Dragonflies are Coming! 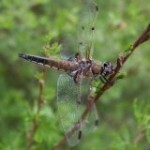 Two days ago, the sun came out with a vengeance and brought with it this year’s first wave of dragonflies.

For anyone who has experienced this phenomenon, it is one of nature’s finest displays of chaotic choreography.

By the thousands, the dragonfly nymphs emerged from the water, unfolded and dried their wings, and then took flight as adults to begin their assault on the seemingly infinite mosquito population.

Watching these prehistoric predators in action is a real treat. With the precision of an elite air force pilot the dragonflies lock on their target and move in for the kill.

The battle raged all day until the sun finally set, and as the dragonflies made their retreat to rest and recharge, the bats emerged to continue the fight.