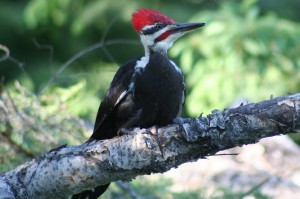 As the largest woodpecker in North America, the pileated woodpecker is truly the woodpecker king. In cottage country, its presence is unmistakable.

Pileated Woodpeckers And The Elusive Photo

When this beautiful bird is at work boring holes in a tree to make its home, or pounding a hollow stump to define its territory, the jackhammer sound of its efforts are carried far across the lake.

Two years ago I noticed a pair of these red headed beauties hanging around the property. On one occasion I even saw them together drilling the same tree in search of insects for an evening meal. Talk about a dream photo!

Unfortunately, our very impressive guests were camera-shy and rarely stayed in one spot for more than a few minutes. As soon as they sensed my presence, they took off.

I thought I had discovered their nesting tree last fall, but that location wasn’t used this spring. I suspect they nest in a new location every season.

After two years of blurred images and near misses I had all but given up, until about ten days ago when I thought maybe, just maybe, my luck had finally changed.

I was on the dock with my fishing rod, making a feeble attempt to catch some dinner when I heard the familiar rat-a-tat-tat behind me. On the east side of the property one of the pileated woodpeckers was working its way along a few old logs that I haven’t quite found the energy to cut up.

My first reaction was to just sit and watch the bird for the two or three moments that I expected it to be there, but when I realized that it was quite preoccupied with its work, I thought “why not give it another try” and quietly made my way back to the cabin to get the camera.

Finding the zoom lens already in place, I briskly shuffled back to the door and out onto the deck.

Missing the last step as I tried to remove the lens cap on the fly, I noisily stumbled onto the grass, cursing my clumsiness and fully expecting my target to be long gone.

I tiptoed across the yard using a spruce tree as cover. All the critters were certainly watching from the forest, throwing elbows into each other, and covering their mouths as they laughed and giggled, pointing at the silly man with his camera once again trying to get a picture of the king of the woodpeckers.

When I reached a point where I could see the logs, the woodpecker was gone.

Angry with myself for believing that things would be different this time, I was about to stand up and head back down to the dock when I caught a brilliant flash of red out of the corner of my eye. The woodpecker had moved, and it was now on a log only 30 feet away!

Raising the camera, I knew the shot was going to be difficult as I had to try to take the picture through the branches of a pine tree. I left the camera in auto focus, set the dial to sport mode and rattled off a few shots. A quick check showed that they were all blurry. My target kept moving around and the lens was focusing on the branches of the tree.

At the risk of scaring the bird I shifted my position to try to get a clearer line of sight. Just as I did, the woodpecker hopped onto a different part of the log providing a perfect view free of any obstructions. I couldn’t believe it!

Taking aim, I let fly in full burst mode like an excited soldier with an automatic rifle. The moment only lasted about two seconds before the bird took off. Sure that I hadn’t gotten a clean shot, I didn’t even bother to review the pictures as I walked back to the cabin, cursing everything I could think of.

Setting the camera down, I began to walk away fully believing that I had just missed the best chance I would ever get to photograph the red headed king. For some reason, though, I couldn’t resist. I wanted to know. I had to check the pictures, even though I knew I would be disappointed.

The critters in the forest were also eagerly watching my next move from the woods. I suspect the little red squirrel was reporting from the tree just outside the living room window. They had all laid their bets on whether or not I would once again emerge from the cabin as a beaten man.

As I half-heartedly flipped through the pictures, my jaw dropped as the one above came up on the screen. I couldn’t believe my luck, and luck is all that it was. The picture isn’t perfect, but considering the circumstances, I’ll take it.

Apparently, the little red squirrel lost his whole winter stash by betting against me.

Written and photogrpahed by: Andrew Walker