Cottage Tips > Wildlife Stories > Up the Path Without a Gun

Up the Path Without a Gun 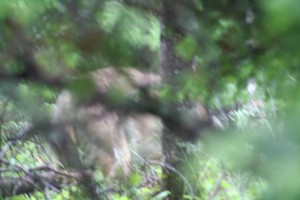 It’s a gruesome tale but it has to be told.

A Dreary Day And A Blood Curdling Cry

Sat. June 18th, 2011 was a dark, damp, and rainy day. With the wood stove fired up I had planned to take advantage of the dreary weather to get caught up on some work.

At about 2:15 p.m., as I sat crouched over the laptop facing the east side of the living room, a flash of brown blew by the window. I didn’t see what it was but it startled me enough to invoke one of those, “what the heck was that!?” reflexes.

A few moments later a blood curdling cry pierced the walls of the cabin, and I instantly new that something terrible had just happened.

It sounded just like the desperate bleating a goat makes when it knows it is being dragged off to the slaughter. And in this case, the plea for help was short lived.

Not having a gun, I grabbed the next best thing, my camera, and quickly went out to investigate.

The noise had come from the forest behind the cabin. Rather than charging straight into the bush, I decided to slowly work my way along the narrow path that leads to the back of the property, carefully peering into the forest to try to locate the source of the commotion. About 40 metres up the path I was stopped dead in my tracks.

Through the trees about 15 metres to my left I could see the outline of a very large animal, and it was ferociously devouring something.

I shifted to the right and crouched slightly to get a better view. At first, I thought the animal was a bear because it was so big. The problem with this theory was that the fur was brown and grey. In these parts, all the bears are black.

Using the zoom lens on the camera I strained to get a better view. Then it happened. The animal lifted its head to throw back a chunk of its meal and I realized what the creature was – a wolf! A very large timber wolf.

I have to admit that I got scared at this point. Trying to get the camera to focus, I took a single picture. I had forgotten to switch it to silent mode and as soon as the wolf heard the click of the camera it raised its head, quickly sniffed the air, lowered its head again and then disappeared, crashing loudly through the forest in the other direction.

Knowing full well that it could easily back track and cut me off, I hastily and noisily worked my way back to the cabin to check the photo and regain my composure. The picture was blurry, but it was possible to see the tail and back haunches of the beast.

A few minutes later, having calmed down, I decided to investigate the crime scene. This was probably not the wisest decision I made that day.

Nonetheless, I went straight into the forest and headed for the spot where the wolf had been spotted. Sure enough, there was evidence that a kill had been made – traces of fresh blood on the leaves of the small plants and even a small bone that appeared to be a rib. There was no sign, however, of the victim.

The wolf had evidently carried off its kill when I startled it. I convinced myself that the animal would be long gone by this point and decided to try to track the path it took through the property. Within five minutes, and not even 150 feet from the kill site, I made an unsettling discovery.

Stashed under the low hanging branches of a spruce tree, lay the carcass of the victim. It was a baby deer. The poor creature was no more than a few days old. The wolf had ripped open the fawn’s midsection and had been in the process of consuming the belly and entrails of its kill when I interrupted it.

At this point it hit me that the wolf was likely watching from the cover of the nearby bush. I snapped a couple of quick photos of the fawn and briskly hiked back to the cabin.

The next morning I returned to the location of the deer carcass only to find that it had disappeared. As expected, the wolf had come back to claim its prize.

Although I feel bad for the fawn, the more disconcerting issue is the fact that such a large wolf would be brazen enough to hunt so close to an inhabited cabin in broad daylight.

During the week I am often the only person on the lake, and an event like this would be more likely. But on this day, a number of the neighbouring cottages were also occupied. Although the weather was bad, people were still outdoors working on various projects. Despite the extended human presence, the wolf still continued to hunt.

Hopefully it was a one-off event and the animal has moved on. Wolves are common in this region, and I have heard them howling on a number of eerie summer nights, but it is the first time I have seen one on the property, and to be honest, I hope it is the last time one of these impressive beasts comes so close to home.

I have decided not to add the photo of the carcass to this post because our deer-friendly readers may become upset.

The blurry photo of the wolf is at the top of the page. You can just make out the back half of it and the tail.