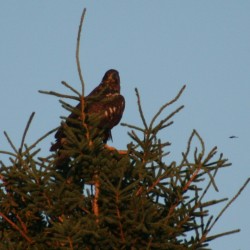 A golden eagle made an appearance near the cottage the other day and actually sat in one spot long enough for me to scramble along the shoreline and get a few pictures.

The famous hunter flew in just before dusk and landed on the top of a large spruce tree.

A young deer was browsing in the meadow below the tree and although a large female golden eagle is capable of taking one, this guy would have had a tough time, so I suspect he was just resting or scouting the territory.

I have seen a pair of these magnificent raptors flying around the area over the past couple of years, but have never had the chance to get a photo. We regularly see other impressive birds of prey, such as ospreys and bald eagles, but the golden eagles turn up less frequently. They really catch your attention when they arrive because they completely dwarf the other birds.

The male, which I suspect is the one in the photo, is bigger than our local bald eagles. I saw the female only once last year from the boat when I was making a run back towards the fishing lodge. Perched on the top of one of the cabins along the way not five minutes from my place, the bird stood out like a giant roof ornament; it was massive. It would have been the photo of all photos, but I didn’t have the camera with me and decided not to make the time to go back for it.

If you look closely at the first photo, you can see a dragonfly approaching the eagle from the right side. It gives us an idea about how big the golden eagles actually are. Maybe the deer was on the menu! 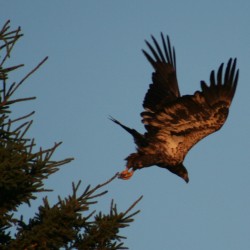 As soon as the eagle figured I had gotten too close it decided to take off.

I have been told that immature bald eagles are sometimes mistaken for golden eagles.

I don’t believe that is the case in this instance.