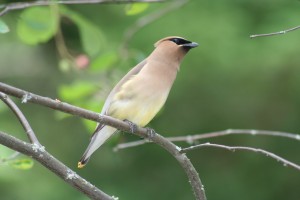 Just behind the back deck of the cabin I have a terribly overgrown saskatoon berry tree. I call it a tree because it’s at least fifteen feet high, and this year, it’s full of inaccessible berries. Well, they’re inaccessible to me.

As I worked away in the gazebo the other day, a group of seven cedar waxwings flew into the saskatoon bush and started picking off the berries and swallowing them whole.

I swear each one of them looked at me with a subtle smirk every time it stole another berry.

Once I got over my anger, I decided to take advantage of a great photo opportunity. After all, the cedar waxwing is one of the most attractive birds in the forest. I slowly ducked out of the gazebo and around the cabin to the front entrance where I grabbed the camera and returned to find the birds still gorging their gullets.

Yes, I agree, it would be a good idea to keep the camera with me when I work from the gazebo.

Just as I got myself into a good position, the feeding frenzy stopped. I expected the birds to take off but they just picked spots on separate branches and quietly rested. I guess they were letting their meals settle.

Eventually I got too close for their comfort, and despite their full bellies, the gang of cedar waxwing bandits flew off to scout their next heist.