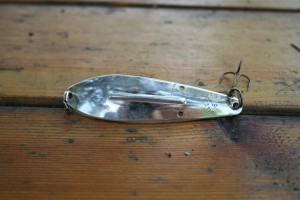 We got off to a slow start for the first stage of the Grandpa’s Tackle Box Project.
It took a bit longer than expected to get into town to get some new rings and hooks.
After that I was away from the cabin for a few days.

We also had some nasty weather that came through and knocked out a few power lines in the area but everything seems to be on the mend and I actually had a chance to do some fishing with one of Grandpa’s Lures while this was all going on.

I decided to start with the Williams 60 spoon. It cleaned up reasonably well and managed to catch a few fish. At last count I caught 9 small northern pike in the range of 14 to 24 inches and 3 walleye. 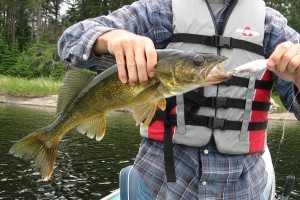 Here’s a picture of the largest walleye.

This old boy measured 21 inches and by the look of him, has been around for quite a while. We snapped a quick photo and sent him on his merry way.

All of the fish were caught in less than 8 feet of water, mostly located around thin weed beds.

The interesting thing I found with the Williams 60 is that half of the fish hit the lure as it was sinking just after impact, or during the pause after I gave the line a short jerk on the retrieve. This spoon flutters nicely as it sinks and really seems to catch the attention of the fish.

So, I would say that the project is off to a slow but successful start.

Stay tuned for the next report. I have been watching the action on the water and have almost decided on which lure to use for the next stage.