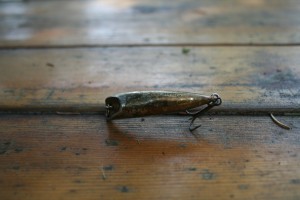 I finally decided to use the Canadian Wiggler for the second week of fishing with Grandpa’s Lures.

Fishing Quiet Bays On Windy Days Can Be Productive

The weather was very windy on the days that I used this lure and I was fishing alone so I headed for a couple of protected bays where I could drop the anchor and cast around.

The first spot has a mix of everything including weed beds, a rocky drop off, and a few sunken trees.

On the fourth cast I caught this chunky northern pike. It measured just under 27 inches.
The net was almost too small. My larger net is out of commission for the moment so I have been using the walleye net for everything, which isn’t advisable.

Trying to bring in a fish like this while reaching for the camera is a difficult task. As you can see from the picture, the pike was nice enough to spit the hook just as I got it into the net so it made for an easy release – one of the benefits of pinching the barbs back on the hooks.

Pike this size and larger have a habit of thrashing around when they are brought into the boat and that sometimes results in the hook being transferred from the fish to a finger. Anyone who has had the unfortunate honour of trying to dig a hook out of their hand will tell you that it isn’t a pleasant experience. So, it is always in the best interests of both the fish and the fisherman to release the fish at the side of the boat.

I landed two more smaller pike that afternoon.
Here is a photo I snapped of the little one. 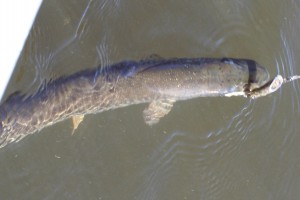 The second day was also windy so I headed to another bay hoping to catch a couple of walleyes. I ended up with three more northern pike. Here is a photo of one that was about 21 inches.

The Canadian Wiggler has a ton of action and is a great lure to use when the weeds are still two or three feet below the surface because the lure can be easily worked at this level. It is lighter than the spoons so it won’t sink as quickly, and tends to pull through the weeds more smoothly. The Canadian Wiggler will also bounce off rocks quite nicely which often makes it effective for catching pickerel, especially on overcast days.