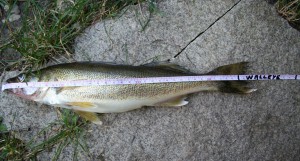 Are you a walleye limit cheater?

It is no secret that many walleye anglers in Ontario are regularly taking home more and larger fish than the law allows.

Honest anglers are getting frustrated and the issue is becoming a hot topic on a number of popular walleye lakes.

Ontario walleye (pickerel) limits for each Ontario zone can be found at the Ontario MNR: Ontario Fishing Zones With Catch and Keep Regulations.

While the days of taking trophy fish out of the water and mounting them on the cottage wall are all but gone, there seems to be a stumbling block when it comes to following the rules for keeping the legal size and number of walleyes.

Resisting the temptation to add to the cabin decor is obviously easier than passing up a chance to fill the cottage freezer.

Personally, adhering to the rules is a straight-forward and easy decision. I stand firmly in the “conservation is good” camp and I honestly believe that the people working for the MNR who are responsible for setting the regulations are well informed and know what they are doing.

I suspect most anglers who don’t cheat subscribe to the same philosophy that I do, or at least believe in the overall conservation objective, even if they disagree with the limits.

On the other hand, the walleye anglers who regularly break the rules are a more diverse group. In an attempt to understand their motivations for not following the walleye regulations, I have organized them into different categories:

Where do you fit in?

The “walleye fanatic” cheater.
This is the hard core walleye angler that believes the fish are there exclusively for his exploitation and keeps everything he catches regardless of the rules that are in place.

The “paid my fees” cheater.
This angler assumes that his annual licence fee grants him the right to keep as many fish as he chooses. He is similar to the fanatic cheater but at least feels like he has paid for the fish.

The “it’s factored in” cheater.
This angler believes the MNR expects anglers to cheat and builds this expectation into the slot size and limit regulations. Generally, this guy is also the one who takes a few extra worms or minnows when he visits an honour system bait shop.

The “honest” cheater.
This angler only keeps fish that are in the legal slot size, but tends to make two or three runs back and forth between the fishing hole and the cabin freezer when the bite is on. His justification is that he is leaving the bigger ones to breed and there are lots of slot sized fish to go around.

The “sandbagger” cheater.
Similar to the honest cheater, this angler may only take slot sized fish but has no problem taking a large number of fish over the limit because he only fishes for two days a week. He feels justified in making up the limits from the other days that he could have fished but didn’t.

The “gambler” cheater.
This angler weighs the odds of getting caught and decides to cheat based on the fact that he will most likely get away with it. Since most cottagers only see the Conservation Officers on their lake once every summer, these anglers feel they don’t have a lot to worry about.

The “risk versus reward” cheater.
Similar to the gambler cheater, this angler weighs the costs of getting caught against the benefits of having a freezer full of 24 inch walleyes. Considering the high price of buying walleye fillets at the grocery store or enjoying a walleye meal at the restaurant, the rewards seem to outweigh the risks.

The “business on the side” cheater.
This angler makes a few bucks by illegally selling the walleyes he catches. The high profits feed the greed and subsequent over fishing.

The “follow the herd” cheater.
This angler used to follow the rules but saw everyone else enjoying big walleye dinners without repercussions so he joined the dark side.

The “one day only” cheater.
This angler puts everything in the live well on Friday night but follows the rules on Saturday and Sunday.

The “armchair biologist” cheater.
This angler claims the people at the MNR don’t know what they are doing. He believes there are too many larger fish and not enough slot sized fish and he takes it upon himself to help rebalance the inequality by keeping fish that are on the long side of the slot.

So, how do we get walleye anglers to come back from the dark side, or better yet, never cross over to begin with?

The responsibility should lie with all parties, but anglers are notoriously bad at self regulation. While ratting out other anglers on the lake works well for the MNR, I don’t recommend it. This tends to upset the cottage community atmosphere. Besides, most cottagers quickly set aside their “save our walleyes” flag the moment they get an invite to enjoy a nice pickerel dinner.

More education and awareness marketing isn’t going to be effective. Walleye anglers are already constantly exposed to the conservation message. We hear it from our favourite pros on the fishing programs and read about it in the fishing magazines. It isn’t working.

I strongly believe that increasing the number of Conservation Officers patrolling the waterways is the only way to get people to consistently adhere to the rules. Everyone knows the MNR is hugely understaffed.

Without a significant physical presence on the lakes and rivers the conservation rhetoric is just wasted energy – all bark and no bite – and the time and money pumped into information programs gets wasted because there is no follow through.

So where are all the funds going to come from to pay for the required additions to the enforcement teams?

Hiring staff is expensive and the government obviously isn’t concerned enough about wildlife conservation to redirect more tax dollars to pay for a significant expansion of the MNR.

Here is my plan:
(Hold on to your bottom bouncers because this is going to hurt.)

1. Increase the fine per fish from $250 to $2500.
That’s right, a massive hit to the wallet will cause any of the financially motivated cheaters to rethink the game. We have to move the risk/reward imbalance heavily onto the risk side. The increased revenue from the higher and more frequent fines will help pay the extra staffing costs.

2. Double the cost of the annual fishing licence.
The extra fees must be exclusively spent on placing more Conservation Officers in the field. I know this recommendation isn’t going to be popular with the people who always follow the rules, but at least we would know the money is going towards paying someone to catch the bad guys.

As with most situations in society, people tend to respond to drastic or even draconian measures. It’s an ugly way to get the message across but it works. Just look at the gains being made in the battles against drunk driving and speeding.

At the end of the day, walleye anglers have to believe that the regulations really are set to ensure a healthy and sustainable fish population that can be enjoyed by walleye enthusiasts for generations to come.

How can that be a bad thing?

A general overview of all the Ontario fishing regulations regarding licences, tackle, and bait can be found at the MNR’s Fishing in Ontario page.

Go to the Walleye (pickerel) Fishing Tips page.
Go to the How To Catch Spring Walleye page.