Frogs at the Cottage

Tree frogs, wood frogs, and leopard frogs are just a few of the local inhabitants here at the cabin.

Frogs Can Be Found All Around The Cabin

Gray Tree Frogs (which tend to be green more often than grey) have a habit of turning up in the most unexpected places. We find them in the outhouse, on the roof, and even in the canoe taking trips as surprised stowaways. The frog in the above photo spent an entire day sitting on the hinge of the gazebo door. 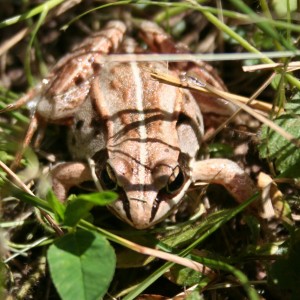 Wood Frogs are forest dwellers and we often see them in the yard near the bush.
They tend to be the favourite meal of our local garter snakes. On a few occasions I have come across an unlucky Wood Frog that has just been caught by a snake. By the time I get my camera and return to the kill site, the frog has always disappeared. 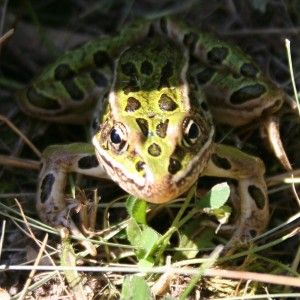 Northern Leopard Frogs appear to be making a comeback at our place this year as there seems to be a larger number of them hiding in the long grass near the water’s edge. It amazes me that they are able to survive an entire season considering the fact that birds, snakes, foxes, fish and a number of other animals will gladly turn the Leopard Frog into a quick lunch.