Going Batty At The Cottage 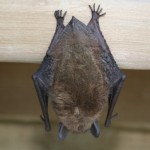 The first time our family had bats in the cabin, we thought it was both a frightening and amusing occurrence. The second episode proved to be much more serious.

Attacked By Bats In The Cabin

The first bat attack occurred as I was in the loft lying in bed waiting for the evening breeze to flow through the window and cool down the cabin. It was pitch black and I couldn’t see a thing.

Suddenly, I felt a wisp of air as something brushed by my face, as if touched by a feather, but not quite. A moment later it happened again, and I knew something was wrong.

As I jumped out of bed and switched on the light, I found myself being attacked by a pair of bats. Calling down to my parents who were sleeping in the main-floor bedroom, I announced the situation and asked for a fishing net.

My mother shortly arrived to the rescue with two nets. Driven by adrenalin, we laughed our heads off as we did our best to swat the two bats out of the air. We were completely naive about the risks.

My father, somewhat less amused by the whole ordeal, didn’t even bother to get out of bed, which in hindsight was likely the wiser decision.

We eventually succeeded at capturing the intruders and promptly released the wayward bats back into nature where they belong. Fortunately, I had handled them with a leather work glove.

A Bat Colony In The Cabin
A feeble attempt was later made to plug a few holes here and there in the loft where they might have come in, and we didn’t give the bats much more thought after that. This was a big mistake.

The following summer I realized that ignoring the situation had created a serious bat problem. And this time the story was much different and much less entertaining.

Over the course of June and July I began to hear a substantial amount of noise in the roof above the loft on the south-facing east end of the cabin.

At first, I thought it was more mice, but after standing outside at dusk one evening in late July and looking up at the roof peak just behind the woodstove smoke stack, I notice what appeared to be a bat leaving the cabin.

The first plan of action was to bang on the walls and ceiling where I could hear the activity during the day. Initially I thought it had worked. After a few days of relative inactivity, the bat party continued and I resorted to more intense pounding, angry threats, and even desperate attempts to politely negotiate a mutually-agreeable settlement.

This of course didn’t work very well, and I decided to start pulling away some of the pine boards that nicely covered the walls. What I found was absolutely appalling. Most of the insulation was covered in bat poop.

Looking For Ways To Remove The Bats
Immediately, I logged onto the Internet. The more I read the more depressed I became. Our resident bats are called little brown bats and they tend to seek out places just like the roof of my cabin. It is hot during the day, safe from predators and provides easy access to water and the millions of insects that congregate here every evening.

Apparently, this group of bats was likely a colony of females and their offspring. The male bats tend to do their own thing through the summer while the females raise their young in large groups in places like my cabin. A colony can range from a dozen or so up to several hundred or even a thousand.

The next part really got me – a colony may double in size every year! Now, the benefits of having a colony of bats near the cottage are undisputed. A single bat can take out an insane amount of insects in a night. Nonetheless, having the bats living inside the cottage presents a number of problems that tend to outweigh the benefit of a lower mosquito count.

Bat Guano And Histoplasmosis
First, the bat droppings, called guano, can be quite hazardous as it may be the source of a respiratory disease called Histoplasmosis. The short version is that a fungus may grow on the bat guano and release spores when disturbed. If the spores are inhaled they can lead to some nasty health problems.

Bats And Rabies
Another concern is rabies. Although rare, bats do carry rabies and a bite while you are sleeping may not be noticed until it is too late. If shots are not administered within a short time of the bite, the disease can develop and is almost always fatal if it reaches a certain point.

So, after doing my research and thoroughly scaring the hell out of myself I decided to look for a home remedy.

How Not To Get Rid Of Bats
Yelling and threatening had not worked and the rapid-fire ideas that flooded my mind were even less useful.

Poisoning
Not a good option because a bunch of dead bats in the ceiling is no better than live ones.

Trapping
Not an easy thing to do and handling the bats afterwards is risky.

Mothballs
You would need so many that the cabin would be uninhabitable, and there is no proof it would work.

Hunting
Shooting bats that are resting inside the structure of the roof is a bad idea and illegal in most places.

Smoke Them Out
This might work but what is going to be the source of the smoke. You can’t light a fire in the attic.

Install A Bat House
Maybe, but it would hardly be an upgrade in accommodations. Would you move if you were a bat? As a longer term option this may be the best choice but it is only good if you can get the bats out of the cabin in the first place and find a way to keep them out afterwards.

One-Way Trap Door For Bats
The only solution commonly suggested was to find all of the entry points and turn them into exit-only points. The best device depends on the particular situation.

I opted for a homemade type of trap door using metal window screen. Attaching it with a staple gun, I placed the screen in a way that would allow the bats to leave the cabin, but not return.

It was the beginning of August and according to the experts, the young ones should have been flying by then. If the one-way trap is installed before August, the females will leave but the babies will be left behind to die.

Within a week or two of installing the one-way screen, the colony should relocate.

At the end of September, before closing the cabin, we took the time to properly seal every possible spot we could find that may have allowed the bats to enter the cabin.

It appears to have worked, as I have not had any bats in the cottage since, although I still haven’t removed the rest of the ceiling in the loft to see what remains.

I am more than a bit hesitant to do this, but it must be done at some point.

Editor’s Note:
Eventually, I actually did install two bat houses on the property and to my amazement, the bats moved in.

Need more Help for getting rid of bats in the cottage?
Go to the Bat Tips page.
Go to the Installing Bat Houses page.