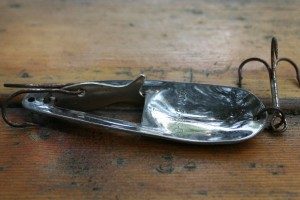 Week Five of Grandpa’s Lures was certainly eventful, and as sometimes happens out on the lake, things didn’t exactly go as planned.

A Lesson Learned When Using Heavy Spoons For Pike

I decided to use the big AMBASSER spoon this week. It is a peculiar lure because it has the little metal fish added in the center which also sports a double hook. As with a lot of accessories that manufacturers add to lures, I suspect that the little wobbling metal fish was added to impress the fishermen more than the fish.

At any rate, this lure is quite heavy so I switched from the spinning combo to a bait casting combo. We all know that big lures catch big fish, right? Well, maybe not always, but I was expecting to catch a nice fat northern pike, and figured I had better use the stiffer rod and heavier line.

Before I get into the bad news, I will tell you the good news.

As far as being able to catch fish is concerned, the AMBASSER did its job. I used the lure on 4 different days and caught 11 fish, all of them northern pike. Half of the fish were caught while fishing off the rocks on the shore of the cabin property because the weather was so bad that it would have been too difficult to fish from the boat. 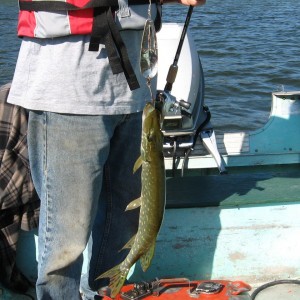 The largest was about 25 inches and the smallest was barely larger than the lure itself. You gotta respect a little pike that goes after a lure that is so obviously out of its league.

I mean, seriously, there must be entire gangs of year-old “pikelings” hanging around the weed beds just daring each other to take a run at big shiny lures. Why else would they possibly think it is a good idea?

Now for the bad news.

I lost the AMBASSER lure. I wish I could say that a monster “Lunge” took off with it, but I can’t. In fact, I lost it in the worst way possible. During one of the casts, I tried to get a bit of extra distance and backed my thumb off the spool just a bit too much. Yeah, you know how this story ends.

The line jammed and Grandpa’s AMBASSER lure sailed off into the middle of the bay with a resounding plop. After a string of choice words that I won’t repeat here because this is a family-focused site, I reeled in the line knowing full well that my own laziness and stupidity was to blame for the loss of the lure.

I hadn’t retied the leader that morning, so there was likely some residual damage on the line from the day before that had created a weak spot. Trying to squeeze an extra few feet out of the cast was also a mistake. We all know that even a finely tuned bait-casting reel is prone to the odd “glitch”.

So, with that said, this report arrives as a “fishing technique and maintenance tips” article, rather than one to boast about catching big fish.

Tip 1:
Closely inspect your line and knots every time you head out on the water. To be safe, cut off the last four feet and retie the line before the start of a new day of fishing.

Tip 2:
Don’t push your luck trying to heave a big lure halfway across the lake. This isn’t the Olympics.

Tip 3:
As in life, having a big lure doesn’t necessarily mean you will catch the prize fish.

Tip 4:
Sometimes the best fishing is right in front of your cabin.