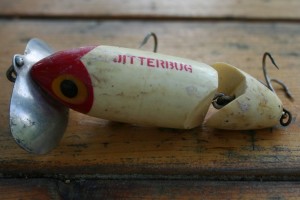 A low pressure system arrived this week bringing both mixed weather conditions and active fish. I decided it was time to try out one of grandpa’s old favourites.

Big Pike And Big Fun On A Jitterbug

The arrival of my parents back to the cabin also meant my father could resume his duties as fishing assistant so I decided to move to one of the larger lures in Grandpa’s Tackle box: The Jitterbug.

Big lures don’t always catch big fish, but having another person in the boat makes it much easier to get a photo or two when a larger fish decides to come out and play.

The Jitterbug is a blast to fish with. It chugs and gurgles along the top of the water resembling a small duckling practicing its take-off skills. As most of you know, young ducks are often targets for large northern pike and muskies.

We headed to a few areas where the water was calm, weedy and ranged from two to eight feet deep. Over the course of three days I caught seven fish with the Jitterbug. 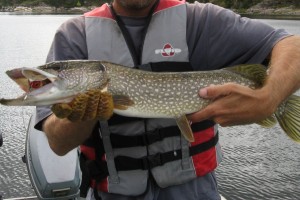 The fish were active all week and although our spinner-baits caught more fish, the Jitterbug provided the most entertainment, and actually caught the largest fish.

The 28 inch northern pike in the picture absolutely hammered the lure as it wobbled across the surface. It was in about 5 feet of water over a thin weed bed.

When this baby hit, you could have heard the splash half-way across the bay. Talk about an adrenalin rush!

On one of the days when the water was choppy I decided to switch back to the Williams60 and worked it in 10 to 12 feet of water near a rocky point. I got two nice fish. This one was 27 inches and seriously upset. I still think the Williams60 is going to produce a mid 30’s jack – we just need to be patient.