Cottage Tips > Wildlife Stories > The Fox and the Cottager

The Fox and the Cottager 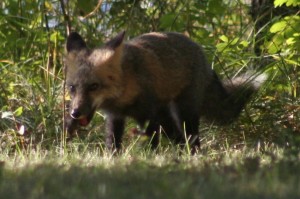 As the mid-September mist drifted across the calm water flowing past the dock, a curious little head popped up just above the long grass along the shoreline.

Moments later, the young red fox emerged with its prize – a mouse.

Sitting on the deck enjoying a hot cup of coffee when the fox appeared, I suddenly felt an eerie sense of deja-vu, wondering if the events of the previous year were about to repeat themselves. Could this be the same fox? Had it really come back to stay with us again?

Last September, a red fox introduced itself one afternoon by peeking its furry head into the living room window. At the time, my mother had been sitting comfortably by the woodstove enjoying a good book. As she tells it, the cute head popped up to take a quick peek, dropped down, then popped up again and looked right at her before withdrawing and making its way off into the bush.

My father and I had been out fishing and upon hearing the story decided that maybe my mother had been dipping into the brandy a bit early that day.

As it turns out, her story is likely true. Over the course of the following two weeks, our furry friend made regular visits. 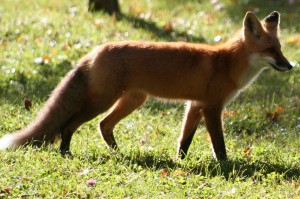 The first few days we were admittedly concerned about the fox’s lack of fear – thinking that it may have been a bit off.

But as the days progressed we relaxed and accepted our new friend as part of the family.

One day, it met us at the dock as we returned from an afternoon of fishing.

Another time, it blocked my mother’s path as she made her way to the outhouse.

And for several long evenings at the end of the month, the fox rested quietly on the lawn a mere twenty feet behind me as I tended the evening camp fire along the water’s edge.

We also noticed a sharp decline in the number of mice being caught in the traps.

The fox’s presence wasn’t without issues. It chose to relieve itself at random spots around the cabin property, so we had to watch our step.

The animal also had a habit of stealing things. In one instance, I left a pair of work gloves on the deck overnight. In the morning, one was missing and I eventually found it half-buried under a tree at the edge of the property.

Nonetheless, when it came time to close the cabin, we tearfully bade farewell to our new friend, hoping it would stay to watch over the cottage during the winter.

When we arrived again in the spring, the mice were back and the fox was gone.

I doubt this year’s fox was the same animal. It appeared to be younger, only stayed for two days, was certainly more timid, and as you can see from the picture, didn’t have its full coat grown-in.

We’ll have to wait to see what next September brings.