After the disappointing loss of the AMBASSER lure in week five I decided to go back to the Williams 60 lure for week six to see if I could scare up a big northern pike for the last week of the 2011 Grandpa’s Lures season.

Catching northern pike in the fall

As far as the numbers are concerned, I was very happy with the productivity of the lure. I caught 14 fish over 4 days and although I didn’t get the big “jackfish” that I was looking for, I had a lot of fun.

I’m man enough to admit that catching small feisty fish can be enjoyable. And at this time of the year when the air and water temperatures are dropping the fish tend to get their attitude back.

The four days saw mixed weather. One day it was too stormy to fish out of the boat so I worked the lure from the shore through a shallow weed bed and over some rocks. The fish were hungry. I nailed four pike in the first twenty minutes and then the bite died off. They must have been following a school of minnows.

On the days when the weather was a bit better I headed to my favourite bays to cast parallel to the shore along the edges of the weeds.

This produced a few more fish including the biggest pike of the week. At 25 inches this fish wasn’t very long but it was thick. It also had a ton of energy and launched straight up out of the water – twice!

You gotta love it when a jack goes airborne.

Pike are a lot like people in both their body sizes and personalities. Some of the little guys are feisty and fight like crazy, and some of the big lunkers just let you pull them in like logs until they figure out that they are in trouble.

A lot of times you can’t tell how big the fish is until it comes up beside the boat. 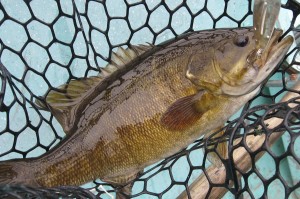 I also managed to get this nice smallmouth bass while fishing the Williams 60 off a rock point.

If you look closely you can see that it actually missed the lure and got hooked on the outside of its mouth. Once in a while we get lucky.

So overall, week six was a good one. As I mentioned, this is the last report for Grandpa’s Lures for this year. I have to say that the old fishing lures definitely still catch fish. My favourite so far has to be the big Jitter Bug. It doesn’t catch a lot of fish but it is a blast to use and when the fish hit it, the adrenalin just pumps through your veins.

Next summer we will work our way through the other lures I chose and maybe even add a few more.

As a final note I thought I would show you the biggest northern pike I caught this summer. This baby was 34 inches and chunky. It hit a small homemade spinner that I have been testing out. The lure still needs some refinements but I may introduce you to it in the spring.

Written and photographed by: Andrew Walker
(photo of big pike was taken by Dad)