Carpenter Ants In The Cottage 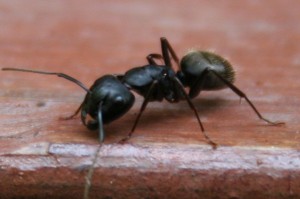 Carpenter ants can be very destructive when they invade your cabin, cottage or home.
Finding a few of the big black ants in the cottage is irritating, but an ant nest built right into the frame of the cottage can be a disaster.

Each June my parents come to the cabin to enjoy a bit of life at the lake. They have been spending time camping or cottaging for decades so insects are an expected part of cottage living, but my mother absolutely hates the large black ants, especially when she sees them in the kitchen.

Mom Wages War
Always armed with the latest traps, baits, sprays and deterrents, she arrives ready to declare war and vows to eliminate the ants from the cottage.

She is right to do so, as carpenter ants have been known to destroy decks and even entire cabins. A friend of mine recently told me that her neighbour lost an entire deck because it collapsed after being destroyed by a large carpenter ant colony.

Whether the ants are actually living in the cabin or simply investigating it as a potential home, I am still not 100% sure. I suspect that most of the activity is merely scouting and reconnaissance because I have never seen flying ants inside the cottage during the weeks when they are most active. Normally this would be a sign that the colony is indeed living in the structure of the cabin.

Each year the routine is the same. The ants begin by going up and down the northwest support post. My mother sets her baits and traps in carefully chosen locations inside the cabin, and then sprays ant insecticide around the post to scare them off.

No Clear Winner
By the end of June, both my mother and the carpenter ants declare victory, although I would call it a draw at best. She claims to see fewer of them as her holiday progresses and the ants always seem to come back after she leaves.

The battle will no doubt continue.

While I would prefer not to see the ants at all, they at least give my mother something to focus on during her cottage vacation.