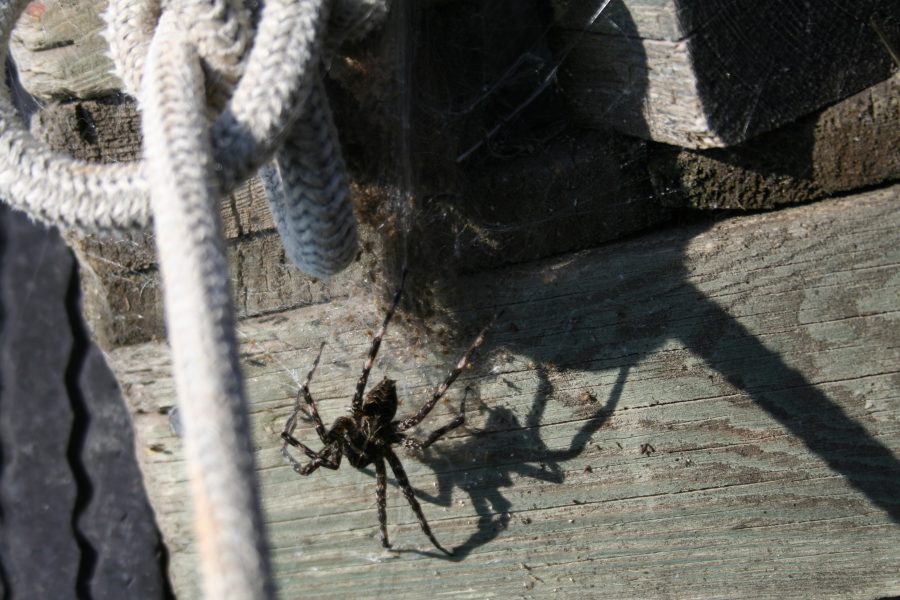 As soon as my hand hit the thick, sticky web surrounding the dock spider’s nest I knew what I had done.

One night in mid July a large dock spider (fishing spider) decided to lay her large egg sac amongst the coils of the rope I use to secure the back of my aluminum boat to the dock.

A storm had blown through during the evening and in the morning I went down to the dock to check the boats.

As I finished bailing the water out of the bottom of the old Lund and prepared to hop back up onto the dock, I reached over to grab the mooring, around which the rope was tied.

Distracted by the tranquility of the morning and admiring a turtle sunning itself on a nearby rock, I didn’t really look at the tie line as I grabbed it. 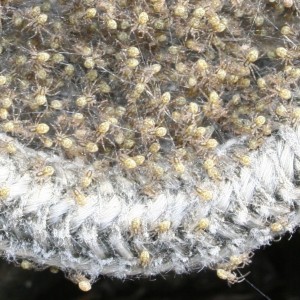 As such, I plunged my fingers straight into the middle of the sticky dock spider nest, sending hundreds of baby dock spiders into a frenzy.

Shocked at the eerie and blood-curdling sensation of being covered with the spider web, I jerked my hand back, which was now covered with dozens of crawling baby spiders.

With the very best of my back-country repertoire, I cursed loudly and thrust my hand into the water frantically trying to remove the web and the newly hatched dock spiders. Once I managed to clean them all off, I looked up at the rope and realized it was absolutely covered with hundreds of the little eight-legged wonders.

I also noticed the large mother dock spider had been guarding her young and was still sitting there with her giant fangs eagerly awaiting a chance to get even. Fortunately, she didn’t bite me when I disturbed her nest.

Not one to miss a good photo opportunity, I regained my composure and went up to the cabin to get the camera. 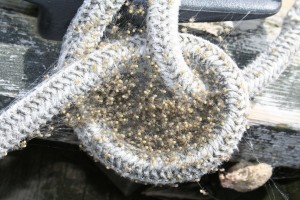 Returning to the dock, I snapped a few pictures of what was left of the large eggs sac, protective web, and the baby spiders that now scattered all over the rope and the dock.

I then grabbed a small stick from the shoreline and cleared away the rest of the egg sac and the thick web. The mother dock spider stood her ground and I eventually pushed her off the dock and into the water. Amazingly, she submerged and swam under one of the tires attached to the dock.

I knew dock spiders were comfortable on top of the water but I didn’t know they can actually swim under water. 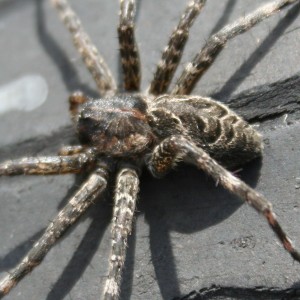 A few moments later she climbed up the other side and sat on top of the tire. I took her picture and then left the grieving spider alone.

Normally I do not disturb the dock spiders, but in this case, the nest was in a bad spot and I needed to clear it out.

I have to admit that of all the creepy-crawly things that live around the cabin, the spiders are my least favourite. As a child I used to have nightmares about spiders, and refused to watch any movies that had spider scenes.

The rest of that day was spent battling an endless barrage of imaginary critters that were crawling up and down my arms, legs and neck.

Every time I think about this story, I shudder.

Go to the Dock spider facts page to learn more about these fascinating spiders.

Go to the Insects and Bugs at the Cottage page for information on how to get rid of spiders, ants, ticks and all the biting flies.