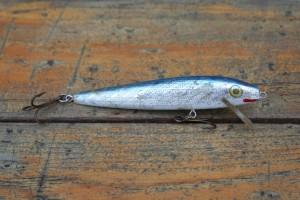 This is the first week of the continuation of the Grandpa’s Tackle Box series.
I wanted to get started a bit earlier in the season but as everyone knows, things don’t always go as planned in the world of fishing.

Nonetheless we are back on track and as you are about to find out, in a big way.

This season I was planning to start with an old REBEL Minnow that I came across in early May in another one of grandpa’s old tackle boxes. Later in the month I set the lure aside to change the hooks. As with many other cottage chores, it got bumped further and further down the priority list.

In early June my parents turned up for their annual visit. A few days after my parents arrived, my father and I spent an afternoon fishing in a quiet bay. As we arrived at our spot we dropped the anchor because I didn’t have the electric motor hooked up and there was a strong breeze. The water was about 8 feet deep at that point and lightly weeded. We were probably 100 feet from the shore.

As I chose a small spinner to test the action for a few casts, my father pulled the old light blue and silver floating REBEL Minnow out of his tackle box. He must have found it sitting in the shed where I had set it aside to change the hooks.

I told him the hooks probably weren’t good but he just ignored me and started to cast the lure towards the shore and jerked it along the top of the water over the weeds. On the first cast he caught a small pike.

I think my grandfather used to use the lure for catching pickerel. It must have done well as it has a lot of small teeth marks on it. It also looks like he had touched it up a bit by painting a red mouth on it.

Encouraged by the success of his first cast my father continued to use the lure. About four casts later the line started screaming off his fishing reel and as I turned to see what he had hooked, I noticed his rod was bent so far over that it was almost touching the water.

In my mind I said to myself: “There is no way he is going to get this fish to the boat. The old hooks are sure to break at any moment.”

The fish briefly came to the surface and we saw that it was a big northern pike. At that moment the pike took a run under the anchor line and I thought, “That’s it, the party’s over. At least we had a chance to see what it was.”

Somehow, the fish suddenly retraced it’s path and came back out into open water. I couldn’t believe it.

About five minutes later the big pike tired out and we managed to get it into the net.

As I scooped the monster out of the water, the hook popped out of the side of the front of its mouth where it had been barely, and I really mean barely, hooked.

Sometimes you just get lucky. 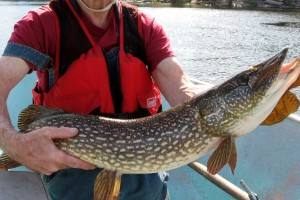 Here is a photo of the big pike caught on a small old REBEL Minnow.

I am not sure how heavy the pike was, but this big old jack-fish was chunky and very healthy.

I decided that grandpa’s REBEL Minnow lure has more than proved that it can still catch fish, and will move on to another one for the next week.