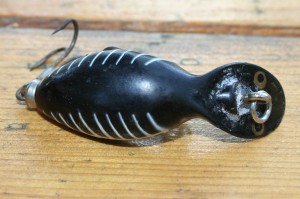 I decided to use the Heddon Tiny Tad this week.
The Tiny Tad is a small lure with some nice wobble action so I thought it would be a good choice for targeting smallmouth bass in shallow water along rocky shorelines or off the point of an island.

Because the Tiny Tad dives down a few feet and has two sets of treble hooks I needed to find an area where there were no weeds or the weeds were deep enough that the lure could be worked just above them.

It’s mid August and the weeds have started to die down a bit, but the water level in the area has also dropped to it’s lowest point in the year so some of my favourite fishing spots are quite shallow now.

With this in mind I headed to a couple of rocky points that were adjacent to weed beds. The water depth was between five and ten feet.

I used the lure on four different days. The Tiny Tad was nothing less than spectacular and the variety of fish that it caught surprised me. 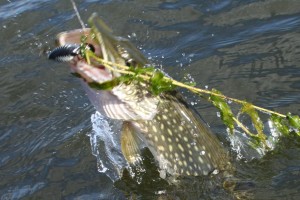 Over the four days I caught 17 northern pike ranging from 18 – 25 inches. The small pike absolutely loved this lure and really hit it hard. This one dove down into some weeds before making a valiant leap right out of the water when it tried to shake out the hook. 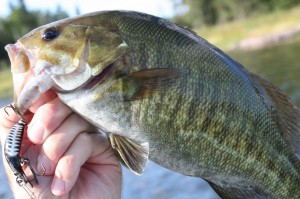 Four smallmouth bass between 12 and 16 inches hit the tiny tad during the week. This one was just barely hooked in the front lip. I expected to get more bass than pike but the pike must have been very active on the days that I used the lure. 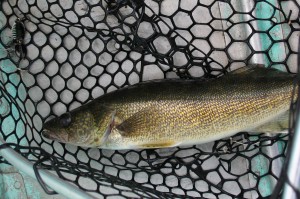 The Tiny Tad also caught two slot size walleyes which made for a great dinner. The first one wasn’t hooked well and the lure fell out just as I netted the fish.
The second walleye that hit the Tiny Tad was much more aggressive and inhaled the entire lure.

Obviously, the Tiny Tad appeals to a full range of fish. It was so successful that I plan to use it as my main lure when working areas that have rocky shorelines located near weed beds.