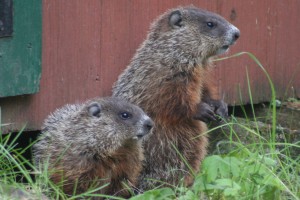 Groundhogs have lived on the cottage property for much longer than I or anyone else can remember.

One of their favourite summer homes is the area under the tool shed that sits near the water.

The mild winter and early spring must have been beneficial to the local wildlife this year as the cabin is now the playground for a number of young squirrels, chipmunks, and groundhogs.

We normally only see a couple of the groundhogs living under the shed during the summer and they usually disappear by early August. 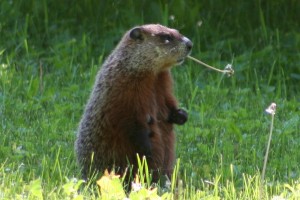 This year, the resident mother groundhog decided to move the young ones into the home under the shed.
Normally, I see one or two of the woodchuck kits hiding in the woods behind the cabin during the summer.

But this year the old girl had six babies and they all moved into the waterfront property.

A New Generation
The first day they arrived, I caught a glimpse of the mother woodchuck heading across the yard from the east side of the property, followed closely by four of the young ones, all walking in a single line. It would have been a fantastic photo, but they had already reached the shed by the time I had grabbed the camera.

The living conditions were obviously tight as the sounds of sibling skirmishes resonated though the shed floor. During the second and third weeks of June the entire gang played and wrestled between meals on the front lawn of the cabin. 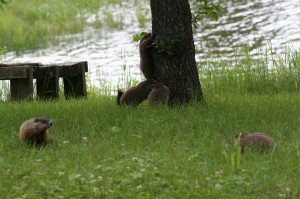 Like most youngsters, they were inquisitive, climbing up to the lower limbs of the oak tree and exploring the long grass of the shoreline. At first they would all scrambles frantically back underneath the tool shed each time I came out of the cabin.

Eventually, they got used to my comings and goings and hardly flinched when I went by.

Cute For A While
As with all young animals, the baby groundhogs were fascinating to watch when they first appeared on the scene, but as they started to grow, they became bolder and grew more mischievous.

They excavated a new hole on the north side of the tool shed and ate through part of the wall in the process. They also discovered the entrance to a drain pipe and began to dig it out in preparation for a new hideout.

I placed a new board along the bottom of the shed and installed a heavy rock at the entrance to the drain pipe in order to keep them from doing more damage.

Just as the novelty of their presence was starting to wear off and my previous fears of an eagle swooping down to pick them off began to change to hope and expectation, the mother groundhog decided the gang was outgrowing the tight quarters under the shed and moved the family into the woods for the rest of the summer.

Back In The Forest
At first she disappeared with four of them. I didn’t see her for almost a week, yet two of the cubs were still living under the shed. I thought maybe they were going to be the new full-time inhabitants, but the mother returned for a couple of days and then all three left the tool shed for good. By the end of June, all the woodchucks were gone.

The extended family has a number of dens spread out around the property and I assume they have all found their new digs to be agreeable because the kits haven’t come back to feed on the wildflowers and plants that were their staple a few weeks ago.

Either life in the bush is more agreeable, or the eagles and wolves enjoyed a number of groundhog dinners.

I don’t know if they mother groundhog will return again next spring, or if one of her daughters will take her place, but I wish them well and hope to see next year’s batch, if only for a few weeks when they are still entertaining and not destructive.

Note: Groundhogs and woodchucks are the same thing and the babies are either called kits or cubs.