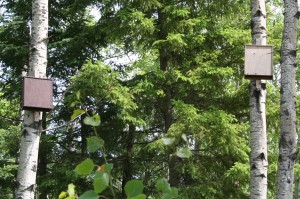 After the harrowing episode of being attacked by bats inside my cabin, I looked for a way to get them out of the cottage roof yet keep them living on the property for bug control.

Installing A Bat House At The Cabin

I installed three bat houses on tall aspen trees close to the cottage. They were placed in a position so as to get as much sun as possible and were high enough, roughly 20 feet, to be beyond the reach of most predators.

To be honest, I had low expectations for success. Despite the height at which the bat houses were installed, I wasn’t sure if the houses would be exposed to enough sunshine and hold enough heat to be appealing to the bats. My other concern was that the resident fisher might climb the tree and find a way to get at the sleeping bats. Ideally, the bat houses would be installed on metal poles.

The first summer seemed to prove my initial doubts were valid. I constantly surveyed the ground for bat guano which I thought would have provided evidence of their usage of the houses. I found none and decided the bat houses had been rejected.

Little Brown Bats Moved In
Last summer a storm brought down the top half of one of the trees, and with it, the bat house. Expecting for find no inhabitants, I was surprised to see that there were six bats huddled together at the back of the bat house. It wasn’t a large colony, but a positive sign nonetheless.

The crash had broken the house and the bats appeared to be a bit dazed but relatively unharmed. I carefully removed the house and placed it on top of the storage shed hoping the bats would be fit enough to leave and move into one of the other houses once the sun had set.

The next morning I was pleased to see that none of the bats were still in the house. They either flew away in the night or became dinner for one of the local predators.

The Bats Came Back
This summer I decided to brave the mosquitoes and stood vigil one night to see if the bat houses had inhabitants. As the sun set and darkness began to fall a single bat drifted by, but it had not emerged from either of the bat houses.

Several minutes slowly and painfully ticked away as more bats fluttered past the front of the cabin but still none had taken flight from the bat houses. With the mosquitoes in full assault, I decided to call off the watch.

Just then, a dark figure emerged from the bottom of the north-side bat house. A moment later, a second bat appeared from the same location. Satisfied that my bat houses had found tenants, I returned to the cabin.

There is some debate as to the types of insects the bats prefer to eat but hopefully the little brown bats devoured a few of the mosquitoes that had feasted on my blood during my watch.

Here is a popular ready-made bat house and a great handbook on how to build your own bat houses.

Go to the Going Batty article to see what happened when our editor was attacked by bats inside the cabin, and what he did to finally get them out.

Go to the Bat Tips page to get information on how to get bats out of the cottage roof or attic and how to make sure they don’t come back.