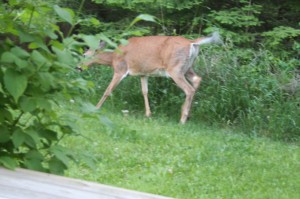 A Kenora, ON resident was catching a few afternoon rays when an urban deer wandered into the yard and attacked her.

Sitting on the back deck of the house and soaking up some sun wouldn’t normally be perceived as a risky way to pass the afternoon, but not in this case. The doe, accompanied by her newborn fawn, had been grazing in an adjacent yard. As the deer lifted its head and caught the sunbather’s eye, it decided the woman was a bit too close for comfort and charged the deck. The attack was so vicious that the startled homeowner was forced to crawl under a patio table to avoid being trampled.

This is the second attack in the city by an urban deer in the past week. Earlier, a doe attacked a woman and her dog. The urban deer herd in Kenora is well known to residents who have a love-hate relationship with them. Some residents enjoy seeing the deer and even break the law by feeding them. Others see them as pests and would prefer to exterminate them. Apparently the deer feel the same way about their human neighbours.

Urban Deer Act Like Gangs
Urban deer tend to be more brazen than their forest dwelling friends. Accustomed to city life, they casually graze on garden plants or anything else that suits their fancy and is not protected by wire mesh or an electric fence. It is common to see the deer strolling down the street, loitering in parks, or trespassing on private property.

The recent increase in violent deer behaviour has locals concerned for the safety of their kids and pets and has re-kindled the debate as to whether or not the urban deer herd should be culled. Dealing with deer “gangs” in the city is not a new issue but this year it behooves the powers that be to reflect on the matter and co-operation from the city council, OPP, and the MNR may be needed.

Every year complaints come in from angry residents fed-up with the gangs of marauding deer who are allowed to freely vandalize gardens and defecate on private and public property. The recent violence has pushed people’s patience to the limit.

Passing The Buck
Various government departments are investigating possible options but most are already understaffed and rightly uncomfortable with the idea of declaring war and undertaking a deer cull within the city limits.

Rather than taking the deer by the antlers and acting on the issue public officials are simply advising residents to stay calm and walk the other way when they encounter urban deer, especially during the critical fawning season.

As always, Kenora City Hall is hoping frustrated residents will refrain from taking the law into their own hands. Vigilante tactics and the formation of a secret community “deer cull” task force are not likely to be tolerated. Such actions would destabilize the always tense and volatile relationship that exists between those in the town who like to see the deer and the others who prefer to eat them.

Doe!
If the situation threatens to spiral out of control the Mounties or even the Canadian Army may have to intervene to restore law and order to this sleepy northern town of 14,000 people.

Go to the Wildlife Problems And Solutions page to get tips on how to deal with deer, bears, raccoon, porcupines, and other wildlife at your home or cottage.