Mouse Poop On My Plate 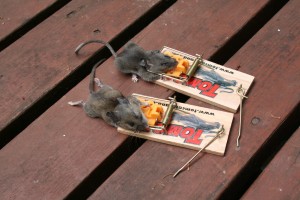 Discovering mouse poop on a plate I left on the counter confirmed my suspicion; the mice had regained control of the cabin.

At War With Cottage Mice

Until recently, this summer had been a good one for mice at the cottage.

An invasion during the winter had not materialized and I proactively began setting traps in June just after my parents arrived. While I caught the odd mouse here and there during the first few weeks, the tally was definitely lower than in previous years.

Unsure of the reason, I attributed the lower mouse population to the presence of a young fisher that had been hanging around the cabin.

After a pleasant month at the lake I headed back to the city for three weeks to take care of a few lingering chores. Errands completed, and eager to escape the suffocating southwestern Ontario humidity, I set out on the long 19 hour trip back up north (train-bus-plane-plane-bus-car-boat), which finished with my arrival at the cabin in a state of complete exhaustion.

Not having slept for the better part of two days, I ate a few pieces of toast with peanut butter and then crashed, leaving the crumb-covered plate and peanut butter-laden knife sitting out on the cabin counter.

The following morning, fully refreshed after a 10-hour sleep, I bounded out of bed and headed straight into the kitchen to make a cup of coffee. Moving to clear the counter, I immediately noticed that my plate and knife had been visited during the night.

A Plate Full Of Surprises
The crumb count appeared to be reasonably unaltered but the knife was now clean. The more obvious and disturbing proof of the intruders’ presence was the fact that the rodents had boldly left their signature business cards on the plate – six unmistakable little black droppings. Ahhgh!

The mice evidently wanted to deliver a message that was loud and clear:

“We have regained control of the cabin!”

Disgusted and angered by this brazen show of disrespect, I promptly cleaned up the mess. Upon inspecting the rest of the cabin I realized that the mice had indeed occupied the cottage in my absence and apparently threw a party to celebrate their conquest of recently lost territory.

Searching For Answers
Where did they all come from? Where had my loyal sentry, the fisher, gone? How many mice are now living in the cabin?

The questions raced through my mind as an hour spent sweeping the floors convinced me that I was now at war.

Mice are a normal part of the cabin experience, and they usually go about their business in a way that is modest and unobtrusive.

The rodents and I have an unspoken understanding; when I have guests I set traps to catch the stupid ones (mice not guests), and when I am alone I generally don’t bother. On their side, the mice stay away from my food and don’t disturb my sleep.

This time they had gone way too far.

The Battle Begins
That night, determined to take back the cabin, I set three traps and went to bed.

At first, the only noise I heard was the disconcerting sound of little feet scurrying up and down the walls and above the cabin ceiling. I swear they were employing psychological tactics, doing it just to taunt me.

At one point, the mice were right above the bed and I resorted to pounding on the wall, hoping in vain to scare them away.

Eventually, the lure of sleep began to distract my thoughts.

Gotcha!
Just as I began to drift off, the glorious sound of an intense SNAP! pierced the silence, and a broad grin spread across my face as I slowly nodded my head in a subtle sign of satisfaction. Resisting the temptation to greet and gloat over my former foe, I impatiently gave in to the need for sleep.

Hours later, I awoke feeling like a kid eager to inspect the tree on Christmas morning, and immediately shuffled around the cabin to see which of the traps had indeed caught a mouse.

Knowing the little pests have a penchant for peanut butter, I had lathered a copious amount on each trap hoping to entice the scoundrels into taking the bait.

Two traps contained dead members of the opposing forces, while the third had been licked clean, and sat empty.

My exuberance lasted but a short time, as upon my recollection of the evening’s events it became clear to me that there were more than two mice. The fact that the unfortunate victims before me were youngsters convinced me that I was dealing with at least one family of squeaking squatters.

With the traps promptly reset and morning coffee in hand, I went about my normal cabin routine.

Mind Over Mouse
Casual inspections of the traps throughout the morning and afternoon indicated there were no daytime takers. As evening fell, a trap in the loft was tripped, but the culprit somehow escaped. I reset it and went to bed.

Once again I heard the patter of tiny footsteps along with the annoying rasp of little claws grating the inner walls. An hour or two of this entertainment passed with clenched fists and racing eyes. At some point, I finally floated away in my magic canoe and fell asleep.

In the morning, two traps contained dead combatants. Each harboured a young mouse meaning I still hadn’t taken out the entire family.

Declaring Victory
The third night was much quieter – no significant activity in the walls or ceiling.

An adult mouse turned up in one of the traps the following morning. Confident I had finally regained control of the cabin, I declared victory in the battle, but certainly not the war.

Now, I am normally a big fan of ALL the critters of the forest and generally enjoy seeing the animals hanging around the cabin. But there comes a point when even a an ardent wildlife fan can be pushed over the edge, and pooping on my plate crossed the line.

Go to the Mice Tips page for ideas on how to keep mice out of the cottage during the winter.

Go to the Mouse Kabab article to read what happened when our editor turned on the gas cook-top for the first time.