Experimental Lakes Area (ELA)
Canada’s world-class scientific project, the award-winning ELA, received a transitional lifeline on Sept. 2, and Canadians should be extremely embarrassed about the way the whole ordeal has unfolded.

Located in the Kenora District of northwestern Ontario, the ELA was initially set up in 1968 to conduct studies on the effects of pollution on water quality.

One of the organization’s early landmark discoveries was that it proved the link between eutrophication and the seepage of fertilizer into water bodies.

Eutrophication is the supercharged algal growth often found in lakes during late summer. The ELA’s early studies discovered that household cleaning products such as laundry detergents were responsible for a spike in nitrogen phosphate levels which fed the algal blooms. 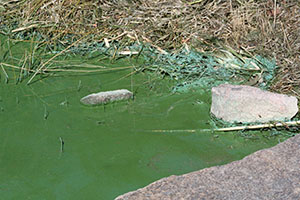 Today, many cottagers still dread the annual arrival of blue-green algae on their lakes. This photo shows an algae bloom as it reaches the shore.


Thanks to the work of the ELA, we at least know why it happens.

The organization has also produced globally-acclaimed reports on the effects of acid rain and climate change.

ELA Funding Cut
In June 2012, the Harper government pulled the funding plug on the ELA as a part of Bill C-38. While the ELA only received $2 million a year, the government estimated it would have to flush $50 million down the drain to close the ELA program.

The funding was set to end in March, 2013. In April, Ontario Premier Kathleen Wynne brokered a temporary extension and finally announced the latest deal at the beginning of September.

According to a CBC.ca article posted Sept. 2, “Ontario will commit $2 million a year to keep the Experimental Lakes Area open, and Manitoba will contribute another $900,000 over six years through its funding of the International Institute for Sustainable Development (IISD), which will run the site, the two provincial governments announced Monday.”

As Canadians, the protection of our pristine wilderness and vast freshwater resources is of paramount interest, not only as a significant part of our national identity, but also as a critical component to our long-term survival.

Why in the world would our federal government spend 25 years worth of funding to shut down a Canadian research institution that is widely regarded around the globe as being best-in-class?

Any deal to save the ELA is better than no deal, but it should never have come to this in the first place.

written and photographed by Andrew Walker