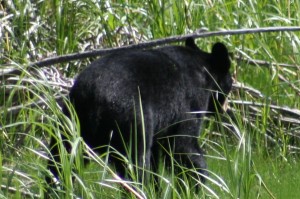 The hunter became the hunted this week when a black bear attacked an 18-year-old girl while she was hunting deer.

Last Monday, Camille Bomboy thought she was going on a routine hunting trip with her step-father, Mike Courter, and two friends to the family’s 400-acre farm near Mill Hall, Pennsylvania. The trip turned out to be the most frightening experience of her life.

While walking through the bush looking to scare up some deer, Courter encountered a mother bear and its three cubs. His presence startled the 300-pound bear and the animal headed the other way, unknowingly driving the cubs directly towards Bomboy.

Courter realized the danger and called out to warn Bomboy the bears were headed her way. Moments later, he heard her screaming.

As the mother bear attacked and mauled the young girl, her step-father fired a shot hoping to scare the animal off. The noise distracted the bear long enough for Bomboy, covered in blood from her injuries, to escape and run towards Courter. The animal pursued Bomboy as she fled, but Courter shot it – just 10 feet before the bear caught the girl.

The bear then ran back into the bush.

Bomboy managed to walk back to the farmhouse before being rushed to the hospital by her mother. Physicians treated the girl for bite and claw wounds to her ear, head and arms.

The freshman student at Lock Haven University had expected to write her exams this week, but will have to postpone them while she recovers at home from the injuries.

This website uses cookies to improve your experience while you navigate through the website. Out of these, the cookies that are categorized as necessary are stored on your browser as they are essential for the working of basic functionalities of the website. We also use third-party cookies that help us analyze and understand how you use this website. These cookies will be stored in your browser only with your consent. You also have the option to opt-out of these cookies. But opting out of some of these cookies may affect your browsing experience.
Necessary Always Enabled

Performance cookies are used to understand and analyze the key performance indexes of the website which helps in delivering a better user experience for the visitors.

Analytical cookies are used to understand how visitors interact with the website. These cookies help provide information on metrics the number of visitors, bounce rate, traffic source, etc.

Advertisement cookies are used to provide visitors with relevant ads and marketing campaigns. These cookies track visitors across websites and collect information to provide customized ads.

Other uncategorized cookies are those that are being analyzed and have not been classified into a category as yet.

SAVE & ACCEPT
Get Cottage Tips Magazine for Free!