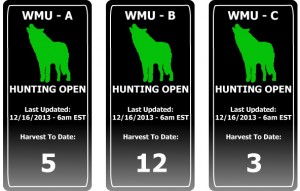 Michigan’s first wolf hunt in over 40 years is being closely watched by hunters and wildlife supporters.

The Michigan Department of Natural Resources has a target harvest of 43 gray wolves for this year’s wolf hunt. It’s the first time Michigan hunters have been allowed to shoot a wolf in nearly 40 years. The DNR estimates the Upper Peninsula wolf population to be about 658 animals.

In 2011, gray wolves were taken off the federal protected species list in Michigan, Minnesota and Wisconsin. The change shifted the management of the wolf populations to the respective states. All three now have limited wolf hunts.

The hunt has been a contentious issue.

Wildlife and animal rights advocates claim the animals play an integral part in a balanced ecosystem and should not be hunted. Wolves had previously been extirpated in Michigan and many wolf supporters argue the wolf population is still fragile. The nearly 50-year recovery process that has taken place is considered a wonderful success story, and certain groups feel the animals still require protection.

Supporters of the hunt say the wolf populations in these states have reached levels not seen in over 100 years and the wolves are now threatening livestock, deer, domestic pets and even humans.

The Michigan hunt is taking place in the Upper Peninsula region of the state. Three Wolf Management Units (WMU’s) were set up and assigned quotas for the 2013 hunt. Hunters quickly snapped up a total of 1200 licenses made available for the 43 wolves.

The rules for Michigan’s new wolf hunt were set as follows: