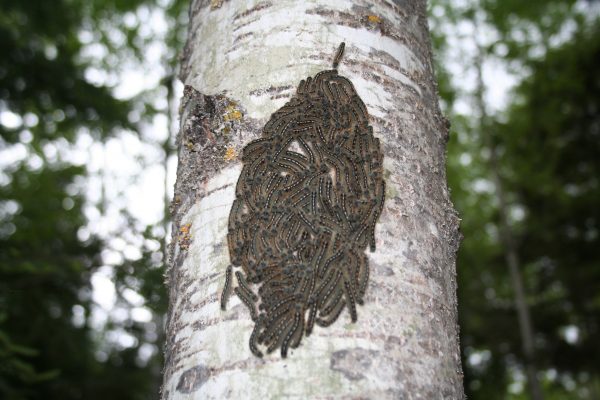 The latest forest tent caterpillar outbreak in northern Ontario, Wisconsin and Minnesota might hit its peak this summer.

FTC defoliation to increase in 2014

“The short answer is the caterpillar is back, and a new outbreak has begun,” says
Taylor Scarr, provincial forest entomologist with the Ontario Ministry of Natural Resources.

Scarr has confirmed suspicions regarding the arrival of the next forest tent caterpillar (FTC) infestation, and MNR forestry officials expect the Kenora area in northwestern Ontario to be broadly affected in 2014.

Every decade the caterpillars follow a cycle that culminates in a massive infestation. Northwestern Ontario is often the hardest hit.

“During the last outbreak in the late 1990s and early 2000s, the forests in and around Kenora were severely defoliated by forest tent caterpillar for approximately 3 years,” says Ian Pyke, area forester for the Kenora District Ministry of Natural Resources.

The following MNR / Natural Resources Canada map show the areas defoliated by FTC in 2001 during the last outbreak. 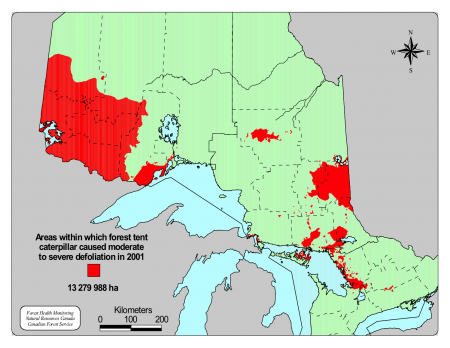 The defoliation in Kenora was part of the larger outbreak that affected over 13.6 million hectares of Ontario’s forests in 2001, according to MNR records.

FTC outbreaks expected
Despite the devastation, the outbreak is a natural part of the forest ecosystem. In fact, the event occurs on a predictable schedule.

Most outbreaks occur about once every 10 years and generally last for three seasons.

The last outbreak peaked in 2001, and Ontario’s MNR data show the first signs of heavy defoliation in the current infestation appeared in 2012. In that year the area around Ontario’s Kenora district experienced 12,159 hectares of moderate-to-severe defoliation, and 18,056 hectares of light defoliation.

In 2013 the affected area increased over six times in size, reaching 191,832 hectares, according to Ontario MNR records.

Lake of the Woods cottage area up next?
So far, most Kenora-area cottagers have been spared by the latest outbreak. The MNR believes 2014 will be different.

“We expect the outbreak to expand considerably in 2014, it’s likely Kenora itself will be infested with the caterpillars,” Pyke says.

It’s too soon to tell if some of the FTC eggs were affected by the extremely cold winter. If so, it’s possible the region will be spared.

The FTC name is a bit misleading because forest tent caterpillars don’t actually produce tents or construct large webbed nests. They simply march on mass by the hundreds – crossing roads, climbing building and infesting trees in search of fresh leaves to devour.

Distinguishing between the two caterpillars is possible, though they do resemble each other quite closely.

Both caterpillars are about the same size, with black hairs and blue stripes down the side.

FTC has white “key hole” or “footprint” spots down the centre of the back, whereas ETC has a solid white line.

ETC is actually the one that spins the ugly tent. While it causes significant damage, the eastern tent caterpillar does not devastate entire forest regions in massive outbreaks.

ETC tents are normally seen in the crotches of branches and are often identified on roadside trees during the summer. The larvae commonly target apple and cherry trees.

To complicate things, Pyke says that during outbreaks, populations of FTC will sometimes overwhelm and occupy the tents made by ETC.

FTC lifecycle
Young larvae emerge from the egg mass at about the same time the buds break out on the host trees. Depending on the year this could be as early as mid April or as late as the last week in May.

The caterpillars initially remain in clusters to feed on the leaves of the host tree but will begin to wander in search of more food once the first tree has been defoliated. The larvae go through five growth stages – each lasting seven to ten days.

Depending on the season, this phase can continue through mid June.

The caterpillar then chooses a stable object with a solid anchor point and surrounds itself in a cocoon.

Seven to 10 days later the moth will emerge. This usually occurs in early July.

After mating, the female moths will lay several clusters of eggs on the twigs of host trees. Each cluster contains 150 to 200 eggs that are covered with a sticky substance called spumaline which attaches the cluster to the twig and helps protect the eggs until the following spring.

Check out the Minnesota DNR page on FTC.

What, if anything, is a cottager to do?
Fortunately, the forest tent caterpillar infestation only lasts a few weeks in the early part of the summer. Because FTC is a native species, the affected trees normally recover. In years when the infestation is combined with drought or attacks by other insects, weak trees might not survive.

In the last outbreak, consecutive attacks by FTC on a large forest region in northeastern Ontario resulted in extensive aspen tree mortality.

The MNR says landowners should allow their trees a chance to recover, and not cut trees just because they’ve been defoliated by the caterpillars.

Clippers can be used to remove the egg bands from the twigs of small trees. This can be done in the fall after the leaves have dropped or in early spring before the eggs hatch.

Woodlot owners can hire private companies to spray trees in circumstances where commercial forests are at risk of extensive tree mortality.

Both the Ontario MNR and the Minnesota DNR suggest using Btk (Bacillus thuringiensis var. kurstaki), a biological insecticide created using a bacterium. The product attacks the forest tent caterpillar larvae while they are active and is harmless to beneficial insects.

B.t.k. is a bacterial insecticide that affects only the caterpillars of moths and butterflies that are out actively feeding at the time the spray is applied.

The insecticide is most effective when the larvae are small. This would normally be in May. As the larvae get larger, they are harder to kill and may defoliate the tree before the pesticide takes its effect.

Natural control of FTC
Nature also has its ways of controlling the caterpillars. Birds, rodents, bears and other insects take advantage of the bountiful larvae.

More commonly known as the “friendly fly”, due to its penchant for landing on people, this insect is one of nature’s key tools for controlling the forest tent caterpillar population.

According to the Minnesota Department of Natural Resources, a massive increase in friendly flies signals the end of the FTC outbreak.

The friendly flies deposit maggots on the FTC cocoons. The maggots burrow into the cocoons and feed on the pupae, preventing them from developing into moths.

Friendly flies resemble the common housefly and often prove to be more bothersome than the caterpillars. The flies descend upon cottagers in irritating swarms, often landing several at a time on a person’s arms and legs. Unlike the skittish housefly, the friendly fly tends to hang on until physically brushed off.

As gruesome as the maggots may sound, another FTC predator, the stinkbug, devastates the colony at the larva stage in a way that resembles something out of a sci-fi horror film.

Read the story and see the amazing photos of our editor’s own encounter with stinkbugs as they slaughtered forest tent caterpillars beside his cottage.