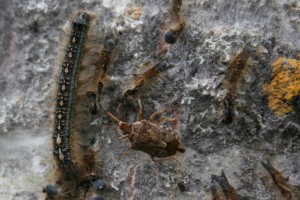 An army of forest tent caterpillars attacking an aspen tree beside the cottage was suddenly ambushed by a swarm of stink bugs.

It’s early morning. As I shuffle out of the cabin with coffee in hand a shiver runs up the back of my neck. I shrug tightly, wrap both hands around the hot mug and take a deep breath of the cool, damp air.

Descending the stairs of the rear deck, an unfamiliar song tugs on my ears. I stop mid-step to take a quick sip and scan the trees looking for the source of the new voice. The bird remains hidden, but something else catches my eye and I plod along towards the forest beyond the gazebo to inspect this curious sight. 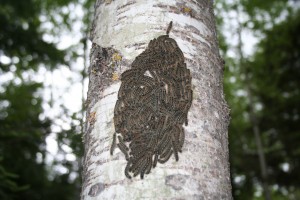 Off to my right, not 15 feet from the old birch-bark canoe, a large black spot adorns the trunk of one of my prized aspen trees.

As I draw closer to inspect the patch, I realize it is alive.

A colony of forest tent caterpillars has formed a thick cluster on the tree, roughly 10 feet above the ground.

The coffee mug tips as I plunk it down on the wet grass. A refill will have to wait.

Cursing the invaders for attacking my tree and causing the loss of my coffee, I scurry straight to the back of the shed to retrieve the stepladder and a piece of firewood.

With ladder in tow and sporting a determined brow I lumber back to the scene to rescue my beloved aspen.

The vile insects are about to be pulverized into caterpillar purée.

But the moment I place the ladder against the tree my curiosity gets the better of me, as it usually does, and I promptly swap the log for my camera.

This decision sets the stage for one of the most bizarre events I have ever witnessed, an image that would haunt me for months to come.

I snap a few photos of the horrid insects and then head to town to run a few errands.

The next morning, the caterpillars break out of their tight huddle and head in a line for the top of the tree. I regret not destroying them when I had the chance, and abandon the scene to work on another project. 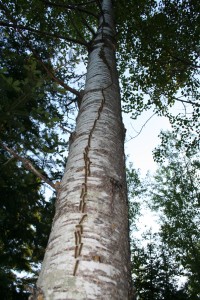 Several hours later, I notice the larvae appear to be making a retreat and I soon discover what has been chasing them.

An army of stinkbugs has ambushed the caterpillars and is decimating the colony. 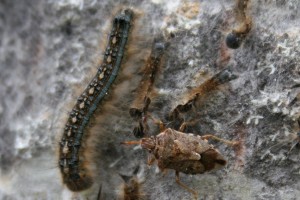 The stinkbug’s method of predation is extremely unsettling. Using a hollow beak tipped with a sharp spike, the assassin pierces the side of the caterpillar and proceeds to drain it dry. The caterpillar isn’t killed instantly. In fact, it squirms in agony as the stinkbug slowly sucks out the entrails.

My emotions waiver as I witness the slaughter. Indeed, a cruel fate has swarmed upon the caterpillars and by late afternoon very few larvae remain alive. 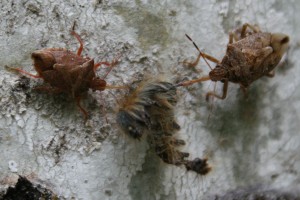 As evening approaches, the stinkbugs have mostly moved on but as I survey the battlefield a few stragglers remain and vie for the right to impale the last of their victims. At one point, two of the stinkbugs attack the same caterpillar.

The sun finally sets, and the nightmares begin – plaguing my sleep throughout the night and for several days thereafter.

written and photographed by Andrew Walker