Why would a bear strip the bark off of my jack pine tree?

Opening day at the cabin always brings a few surprises. After a six month hiatus with the cabin under the guardianship of the local critters, I normally discover that the property has seen some action.

One year I found the leg of a deer stashed under a big spruce tree. Twice, the critters chewed through my telephone line. Last year, a bear ripped the bark off one side of a jack pine tree that grows near the shoreline.

I was concerned that the tree would die but it made it through the summer and by the fall I was convinced it would live. 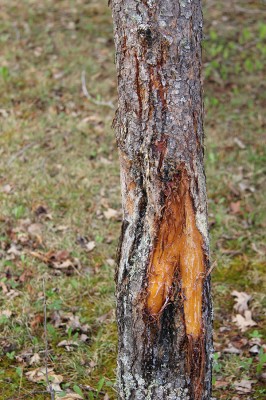 This spring, a bear once again visited my poor jack pine, and this time it shredded the bark off the other side.

I’m not sure if the same bear is responsible and I don’t know why this particular tree is the target. This is the only tree on the entire property that the bear has clawed and stripped.

Bears will tear the bark off trees to get access to the sap or insects. In both instances with my jack pine, it appears the bear ate the bark because there were no remnants lying on the ground.

With the bark now stripped almost all the way around the trunk of the tree, I fear the jack pine’s seasons are numbered, but we’ll see what happens.