The Bat Houses Have Tenants 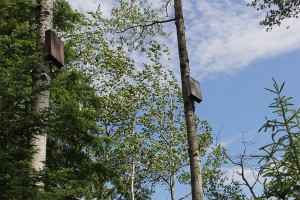 I wasn’t sure how popular the bat houses would be but this year I’m happy to report we have no vacancy.

The bat house hotel is full

Five years ago we installed two bat houses on a couple of aspen trees located near the cottage. The first year, the bats didn’t seem overly impressed with the new offering, and the bat hotels remained empty despite the free lodging.

Not enough sun, not high enough, too easy for predators to get in? I racked my brain trying to figure out why the first-rate facilities were being snubbed.

Rather than moving the boxes, I decided to wait another couple of seasons to see if the situation would change.

During the second summer, one of the trees came down in a storm and I was surprised to find three dazed-and-confused, but otherwise fine, bats huddling together in the back of the box.

That was an encouraging sign but the numbers were still quite small. We put the bat house back up on another tree but I only noticed the odd bat here and there in the following two seasons.

This year it appears the bat houses are full.

Last week I stood under the trees just before dusk and could hear significant bat action (scratching and squeaking) inside the boxes. Curious to see how many guests might be in our lodgings, I returned to the location just after dark.

At first, I didn’t see any activity. Then, one after another, 11 bats emerged from the bat motels.

The mosquito numbers are certainly down this year but I attribute that more to the drier summer and better dragonfly population. Noetheless, the bats are probably doing their part and I much prefer to see them living in the bat houses than finding them in the attic of the cabin, where they were a number of summers ago before we intalled the bat houses.

Here are a few more bat stories you might find interesting:

How to get rid of bats in the cabin is our tips page for dealing with bats once they have decided to live in the cottage attic.

Going Batty is the true story of one family’s frightening ordeal when they discovered bats flying around the cabin as they slept.

Bat houses are easy to make but some cottagers prefer to just order them online. The one below is a very popular model.