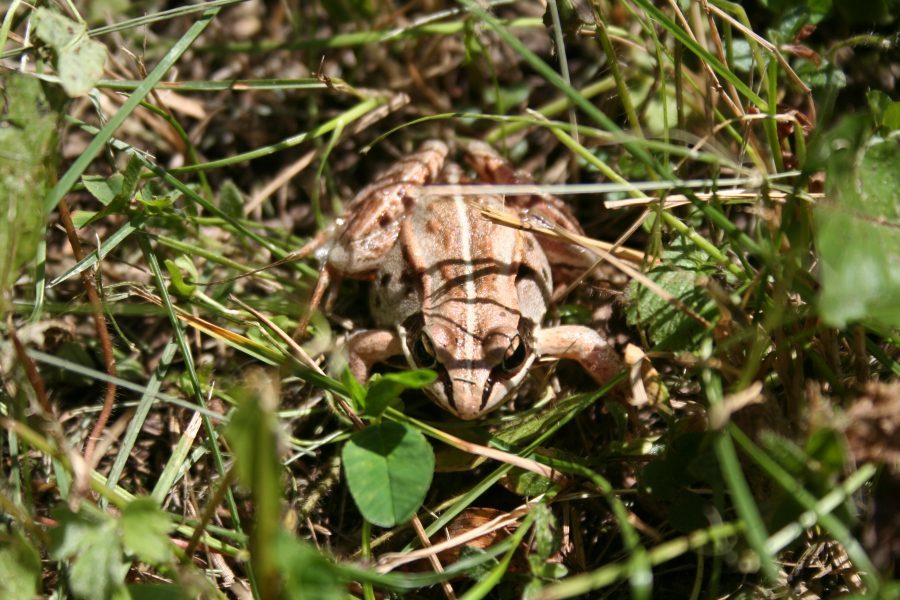 A wood frog is a common sight at the cottage, but few people actually know much about the creature’s amazing life.

Most people see wood frogs when they are mowing the cottage lawn or walking down to the dock with a happy-hour drink. The little critters hop out of the way, hopefully, and that’s pretty much the end of the interaction.

I have always ignored them, but a recent comment from a friend peaked my curiosity, so I did a bit of research on our masked cottage companions.

Forest dwellers
Wood frogs are somewhat unique in that they live in the forest, like toads, rather than in the water like bull frogs or leopard frogs.

This probably explains why they tend to be brown in colour, and have a distinctive black mark running from the tip of their nose to their eyes and across their “cheek”. The colouring and mask help the wood frog hide from its predators, which include snakes, birds, and foxes.

Life cycle
Wood frogs mate in early spring and the females promptly lay large clusters of eggs in puddles in the forest. The eggs hatch within a month and the tadpoles quickly mature, ready to start their lives roaming around the cabin. Assuming they avoid becoming a meal, the frogs apparently live for two or three years.

Food
Wood frogs eat small insects, spiders, slugs, and worms, so you shouldn’t feel too bad about seeing one being devoured by a snake. Everything in nature has its place.

Winter
The coolest thing about wood frogs is the way they spend their winters. Unlike leopard frogs or bull frogs that spend the winter under water, or toads, that dig down into the dirt, wood frogs simply hang out in the leaves and literally freeze.

That’s right, they stop breathing and their hearts actually quit beating when the icy temperatures arrive.

Once the winter is over, and the temperature rises again to the point where the wood frog starts to thaw out, the hardy little heart starts again and it’s time to play the mating game.

After that, the cycle of hide and seek with the snakes begins, and it’s every frog for itself until the next winter.

The bottom line
The next time you see a wood frog in the grass at the cabin, you might want to stop and give it a little tip of your cap, just to acknowledge the creature’s amazing capability to survive the harsh cottage conditions.