Dock spiders prefer to live between the boards of the cottage dock, but Canada’s largest spiders are expanding their territory around the cabin.

Dock spiders search out prey wherever it might be abundant. As a result, it isn’t a surprise to find the big furry spiders with their menacing fangs hanging around the sheds, outhouse, gazebo, or outdoor shower.

We even had a huge dock spider living inside the cottage one summer. 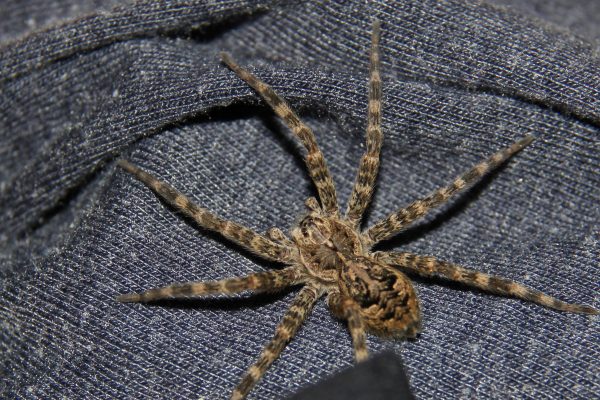 The largest dock spiders always seem to be around the dock. Maybe that’s the best hunting territory. The smaller spiders have to wait their turn and find the next best location when searching for a home.

Dock spiders produce massive egg sacs that contain hundreds of baby spiders. I had the unfortunate experience of accidentally plunging my hand into one of the dock spider nests a few years ago when I reached out to grab the boat line at the dock.

The female dock spider carries the egg sac in her fangs and pedipalps until she finds a suitable place to cover it with a protective web while she waits for the baby dock spiders to hatch.

The mother hangs around to guard the nest once the babies emerge from the egg sac until they head off to explore the world around the cottage.

Should you worry about bites?

Dock spiders have long fangs and powerful pedipalps that look like mandibles. They are capable of catching minnows and small insects.

Unless a person tries to grab a dock spider it is unlikely the critter will bite. Dock spiders are not known for aggressive behaviour towards people. In fact, they tend to move to safety when the egg sac and nest are disturbed.

That said, I wouldn’t want to find out if a dock spider bite is painful. Some people might experience a nasty reaction.

Dock spiders use venom to paralyze their prey. According to scientists, the poison wouldn’t be strong enough to significantly harm a person, unless the victim has an allergy to the spider venom.