Cottage Tips > Tips > In The Woods > Bears Around the Cottage

Bears Around the Cottage 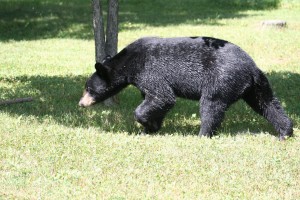 Prevention is the key to avoiding a showdown with a bear at the cabin or cottage.

Attracted by the prospect of an easy meal, bears will search out garbage, seeds in bird feeders, berries on plants, acorns and even ant nests.

How do you know if a bear is near the cottage?
Before you actually see a bear at the cottage, there are tell tale signs to look for around the property that will tip you off that the bear has been visiting while you were away. Take the time to explore your cabin property each weekend and look for these typical bear indicators. Knowing that a bear is in the area close to the cottage will help you prepare for a bear encounter.

Overturned Stones
Bears will flip over rocks and stones to search for ants and other insects. In most of cottage country the bear is the only animal strong enough to do this so a freshly overturned stone may be a good indication that a bear is in the area.

Bear Scat
Black bear droppings can vary depending on what the bear has been eating. During berry season there should be lots of seeds mixed in. As one of the largest animals in the woods, the scat from a black bear will be much larger than any of the dropping from the other animals and tends to be in large quantities.

Scat with fur in it is usually from a wolf, fox, coyote, or other carnivore. Black bears will scavenge a carcass or may kill and eat a small rodent on occasion but their diet mostly consists of berries, vegetation, and insects.

Destroyed Ant Hills
Bears will sometimes tear up ant nests. If you see a recently dug out ant hill, it may be the result of a visit from a black bear. Pileated woodpeckers will also pick ants out of an ant hill, but a bear makes a much bigger hole, and will dig out the entire top of the mound in search of the ants and their eggs.

How Do You Keep Bears Away From The Cottage?
Garbage Storage
Keep garbage in a secure place and take it to the landfill station regularly. Never leave the garbage outside overnight. Once the bear has discovered your garbage, it will likely come back often. This can be a very dangerous situation.

Composting At The Cottage
If you compost at the cabin, do it in a sealed and controlled manner. Place the composter at a safe distance away from the cottage and other buildings such as work sheds and the outhouse so that any bear that is attracted to the compost will be a safe distance from the cabin.

Nuts And Acorns
Rake up acorns that have fallen onto the property from oak trees. Bears love to eat acorns and will climb into the trees to get them. Once the bear has discovered this easy meal, it is not easily persuaded to leave. The bear may hang around for days while it eats the acorns at your cottage.

Clean Barbecue
Keep the BBQ clean at all times. Food scraps that are left on the grill will easily attract bears. Black bears have a keen sense of smell and a slight breeze can carry the odour a great distance which could bring a bear right to your cabin. Few things are more disturbing than the sound of a bear knocking over the barbecue in the middle of the night.

Food Containers
Wash your recyclable cans, bottles, and jars thoroughly. Any leftover bits of food will attract bears and other critters. Keep the garbage and recycling in a locked and secure location away from the cabin. If the bear is determined, it will do a lot of damage trying to get to the food source. It is better to have the bear tear apart a shed than the kitchen.

Bird Feeders
Bears love birdseed. Birdwatching during the morning coffee may be enjoyable but bears will raid bird feeders when the get the chance. Feeding the birds is best done in the winter when the bears are hibernating.

How Can You Avoid Bears When Hiking?
Bear Bells
Carry a bell, horn and bear pepper spray when hiking your local trails. Ring the bell periodically while you are walking to avoid a surprise encounter with a bear. If the bear hears you coming, it will normally move away before you see it.

Mother Bears With Cubs
Stay far away from a mother bear with cubs. The mother bear will be extremely protective and can be aggressive and very dangerous. Give them lots of space and never put yourself between the mother and the cubs.

Wild Berries
Be mindful around patches of blueberries and raspberries in the summer. These are critical components of a bear’s diet and the animals spend a lot of time in these areas. In the fall months avoid areas with acorn-filled oak trees.

What Do You Do If A Bear Attacks You?
Black Bear
Black bear attacks are very rare. If you come across a black bear and it does not run away be observant of its actions. A fake charge is usually the worst you will see. If the bear moves towards you slowly, the risk is much greater.
Stand tall, yell loudly, be aggressive. If it actually physically attacks, fight back.

Grizzly Bear
Grizzly bears are know to be more dangerous than the black bears and contact should be avoided. In the event that the bear attacks, drop down immediately and play dead. Lying face down, spread out your legs, and protect your head.

How do you get rid of a problem black bear?
It is important to have a plan for dealing with a black bear if it becomes a nuisance at the cottage. Killing a bear out of season is illegal. However, most states and provinces give cottage owners the right to defend their property and family in the event that a bear attacks or breaks into the cabin.

As a last resort you may have to kill a nuisance black bear yourself.

Call the local conservation authorities to report the problem bear and get directions from them as to how to deal with it. The authorities are often unable to come to your property to dispose of the bear, so they will tell you what to do. If the officers advise you to shoot the bear, follow their instructions precisely.

How To Shoot A Black Bear

In an emergency situation when an aggressive bear is threatening your family you may not have the time to call the authorities. You may have to kill the bear. Only attempt to shoot a bear if you have the proper licences and permits to use the gun.

What is the best gun to use to kill a black bear?
Use a 12 gauge shotgun with slugs if the bear is closer than 100 yards (90 metres).
If the bear is farther away than this you shouldn’t be shooting at it.

Never aim for the bear’s head. A bear has a thick skull and the target area is small. If you try to shoot the bear in the head, you will likely only injure the bear and make it angry, which will make your situation much more dangerous.

Special Note:
If the bear runs off into the woods after you shoot it, don’t chase the animal. Remember, this isn’t hunting season, you are simply trying to protect your property and your family.
If your shot was on target, the bear won’t go far before it dies and you will easily find it / smell it in the next few days.
If your shot missed and the bear has only been wounded it will be very angry. The animal will either come back for another shot or wander off and die somewhere else.

What do you do after you kill a black bear?
Report the kill to the authorities immediately after you have killed the bear. In most jurisdictions, you will be responsible for disposing of the bear yourself. In remote locations, bury the bear as far away from the cottage as possible on your own land or the adjacent crown land. Do not leave the bear to rot where it dies, especially if it is close to the cottage. The stench will be horrible, and the carcass will attract unwanted scavengers.

Read our featured story: A Black Bear Comes For Brunch about our editor’s encounter with a curious black bear.