Cottage Tips > Tips > In The Woods > Facts about carpenter ants 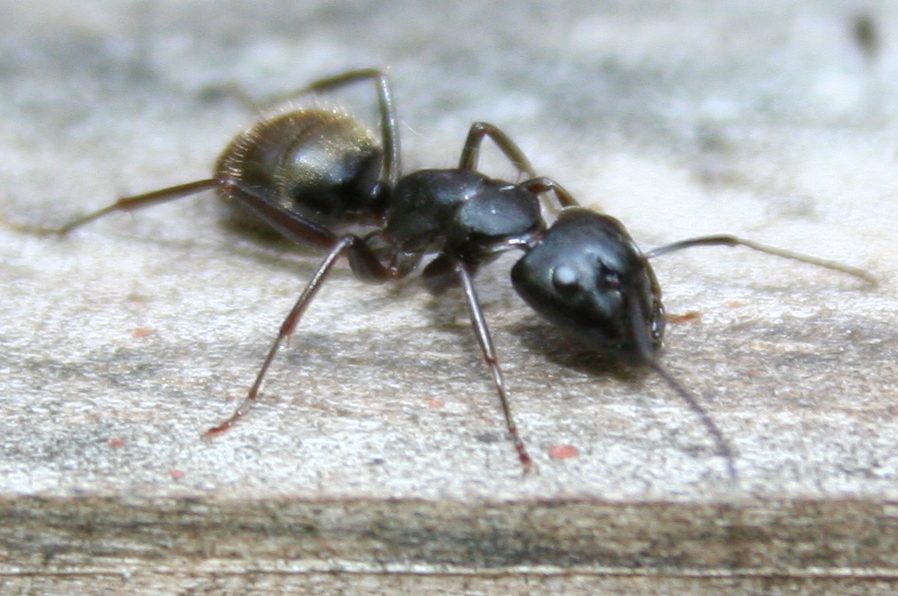 Carpenter ants are a common site at the cabin. Unfortunately, an infestation can ruin the entire building. Here are some top tips on ways to control and get rid of carpenter ants at the cottage.

Trying to get rid of carpenter ants is a battle that cottage owners fight every summer. Property owners in Manitoba, Ontario, Quebec, Minnesota, Wisconsin and Michigan as well as others regions across Canada and the U.S. have seen sheds, decks and even bunk houses destroyed by carpenter ant colonies.

Identification
Carpenter ants are normally identified as the big black ones that like to nest in moist and rotting wood, but the size of the ant depends on the role it plays in the colony. The large ones with wings are the female queens that have emerged to find a mate and search for a new place to start their own colony. The smaller ones with wings are the lucky males who are responsible for mating with the queens. The worker ants come in varying sizes depending on their job. Some collect food, while others look after the eggs or are in charge of defending the nest.

The University of Minnesota has a good page that shows the different carpenter ant castes.

Season
Black carpenter ants usually hit their peak between the end of June and the middle of July but will arrive earlier after a short winter or an extremely warm spring.

Activity
Carpenter ants build extensive nests in damp, rotting wood. Dead logs or old stumps are prime locations. If you have decaying wood in the cottage, the carpenter ants will happily make the cabin their new home.

In the early spring, you may see swarms of flying carpenter ants. These are the males and females that are mating. When the female has finished mating she drops her wings and searches for a suitable place to start a new colony.

How do you know if the carpenter ant colony is in your cabin?
If you see the carpenter ants flying around inside the cabin in the spring, it is a sign that the nest could be located somewhere in the cottage.

Another way to see if the colony has been built in the cottage is to follow the worker ants when they are carrying food. Carpenter ants eat other insects, whether living or dead, and are also attracted to sweet substances.

A particularly bad sign is when you see the carpenter ants carrying the white eggs or larvae into the cabin. This means they are moving the nest from the bush into your cottage. It may be the main nest or a satellite nest that is being set up as a type of nursery.

If you see the worker carpenter ants carrying dead bugs into the cabin it means the nest is likely already located somewhere in the wood in the cabin.

Carpenter ant nests consist of a network of tunnels eaten out of the wood. The tunnels are smooth and clean. The sawdust is removed and often dumped in one location. If you find small piles of sawdust inside the cottage it may indicate the carpenter ants have arrived.

Ant Bait and Insecticide
Place ant traps and drops of liquid ant bait or powder around the inside of the cabin where you see the most activity. You can also place the traps and liquid baits around the locations outside the building where you see the carpenter ants entering the cabin. This is normally around the corners, as the ants often climb up the support posts. If the ants are moving into the cottage, try to trace them back to the nest they are leaving. If you are spraying insecticides to kill the ants, don’t spray the ant killer near the food baits.

With the food baits, the idea is that the worker ants actually carry the poison bait back to the colony. The process can take several weeks and it is important to be vigilant and constantly replenish the bait in areas where the carpenter ants are active and appear to be feeding on the bait.

Removal
The only sure way to avoid battling the carpenter ants every year is to find and destroy the nest. To get rid of a colony of carpenter ants you should replace the rotten wood they are using for their nest. If the colony has been there for many years and the entire cottage is in bad shape then you just have to try and control the ants each year. Otherwise, it’s time to build a new cabin.

Store firewood a long way from the cottage and try to remove any old tree stumps that may be close to the cottage, as these are ideal places for a carpenter ant colony.

Any spare construction wood should be stored away from the cottage and elevated to keep it dry.