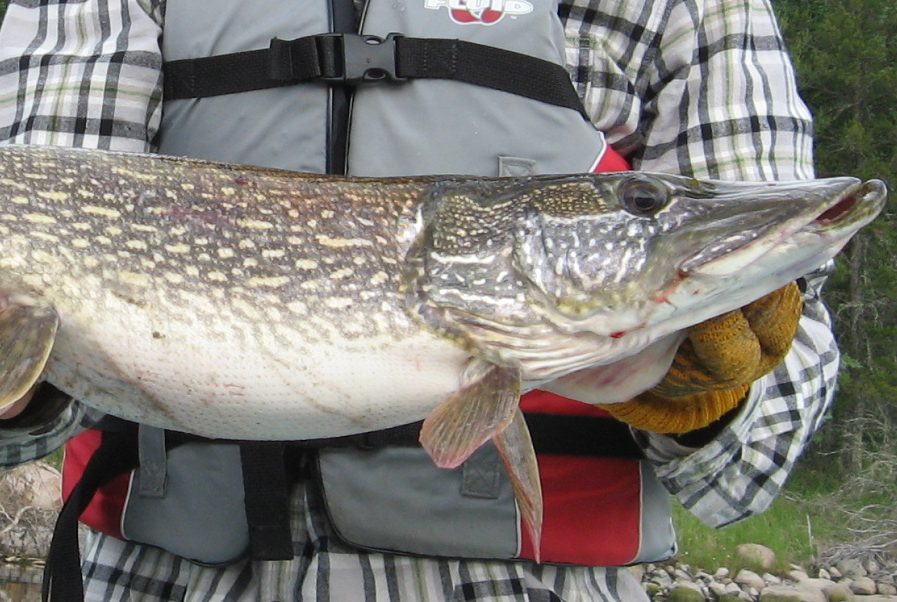 Northern pike are abundant and aggressive predators found in a variety of water conditions.

Where do you find and catch big northern pike?
Large pike like to feed on walleye, bass and smaller pike. Look for runs between islands, drop-offs leading into shallower bays, rocky points, and entry or exit flows between two bodies of water. The really big pike tend to cruise around looking for an easy meal which would be a weak or injured fish. This is why big pike are sometimes caught when an angler is reeling in a struggling walleye or a smaller pike.

In lakes with shallower water and lots of bays, look for big pike to hang out around the fringe of the weed beds where they can pick off perch, walleyes or bass that are feeding on the smaller fish in the weeds.

Pike are commonly found in all ranges of water temperature, but the best water temperature for large pike, according to the Ontario MNR, is about 20 degrees Celsius (68 degrees Fahrenheit).

Where do you find and catch small and medium size pike?
Smaller northern pike are found near weed beds and in shallow bays where they can feed on minnows, crayfish and smaller fish. The young pike tend to be ambush feeders and will patiently wait in a fixed position in the weeds or under a dock until an unsuspecting meal passes by its hideout.

The best bait to use for northern pike depends on the habitat, but pike are regularly caught on spoons, spinners and live baits.

How do you catch big northern pike?
In deep water the best option for catching a trophy pike is trolling parallel to the shore along a drop-off or through the narrows between two islands or joining bodies of water. Large spoons can be very effective lures.

While big pike have been caught on small baits, the big lures generally produce larger fish. The larger northern pike which are located in water deeper than 15 feet prefer to feed on larger fish. A large pike has an enormous mouth and it is easily capable of taking prey weighing more than two pounds. Any lure that resembles an injured bass, walleye or smaller pike is ideal.

In shallow water when fishing for big pike from a fixed position or by slowly working a shoreline, cast your lure in a high arc.  Near the end of the cast, restrict you line so that the lure lands in the water with a loud “smack!”. Big pike are attracted to the disturbance and will investigate when the lure makes a loud noise as it hits the water.

Be ready! If a large northern pike is anywhere near the spot where the lure hits the water, it will often strike the bait immediately.

Large spoons and spinner baits are useful all season.

If the water is deep enough, let a spoon sink for a few seconds before starting to retrieve it after the cast.  The pike will often attack the lure as it is sinking into the weeds or past an underwater overhang.

As you reel in the lure, jerk it once in a while and let it fall back for a second or two before continuing the retrieve.  If a big pike is following the lure, it will often strike when the lure starts to drop.

Quickly cast back to the same spot if you get a bite but the pike lets go, even if it is right beside the dock or boat. Sometimes a big pike will take a few test whacks at a lure before it decides to eat it. If a fish follows the lure or misses it on a fake bite, it will usually still be in the same area and you can often get it to hit the lure on the next cast.

Always keep your eyes on the lure as you are retrieving it. Big pike will often follow a lure right until the last moment before you pull it out of the water. If you are watching carefully, you can see the fish and might be able to tease it into taking the bait.

Polarized fishing glasses are great for pike fishing because they allow you to see what is going on below the surface of the water.

A 1 oz Eppinger Dardevle is the all-time favourite spoon used when trolling for huge pike. The smaller 3/4 oz or 1/2 oz version of this lure produces excellent results when casting.

How do you get the hook out of the mouth of a northern pike?
Be very careful when handling a big pike and removing the hook.  Pike are slimy and tend to thrash around.  The large northern pike are powerful fish and when they start to freak out, it is almost impossible to hold them steady. They also have a nasty set of teeth so it is important to wear a glove. You should always use mouth spreaders and a good pair of long nosed pliers or hook removers.

At the risk of losing the odd fish, consider using hooks with the barb flattened.  Releasing the fish will be easier, as will removing a hook that finds its way into your finger if the pike shakes its head when you are trying to remove the bait. Hooks without barbs are required in some areas so it is important to check the local rules.

Northern pike are caught in a variety of habitats and can range in size from aggressive little foot-long fighters to heavy 40-inch or even 50-inch monsters.

Lures and Baits
Lures that are very large including big spoons, spinner baits, crank baits and stick baits are all effective for catching big pike.

Wire Leaders
When fishing for large northern pike you need to have wire leaders with a strength of 80 to 100 pound test. Big pike will cut though smaller line very easily.

Net
A large net ideally made with rubber mesh and big enough to handle the largest fish in the lake is essential for making the landing and release of the fish as safe as possible for both you and the fish.

Jaw Spreaders
Never go fishing for big pike without bringing a set of sturdy jaw spreaders. Large pike have very strong jaws and rows of razor-sharp teeth. You won’t be able to keep the pike’s mouth open when trying to remove the hook unless you have the jaw spreader in place.

Hook Removers
Special hook removers or a pair of long needle-nose pliers help you remove hooks that are difficult to reach. You want to avoid putting you fingers into the mouth of a big pike at all costs.

Small And Medium Pike
Here is the gear you need for catching small and medium pike. Little pike are feisty and can provide great fun for all anglers. Just be careful when removing the hook. Small pike have razor-sharp teeth.

Rod and Reel
Use a six foot medium action rod and spinning reel combination with 8 or 10 pound line. This size is also good for most bass and walleye fishing.

Lures and Baits
Popular lures for pike include spoons, spinner baits, crank baits and stick baits. Small pike will take a run at just about anything you put in front of them so the lure choice depends more on the water conditions in which you are fishing. Shallow areas with lots of weeds are good locations to use lures that stay close to the surface. Deeper water with less snags can be fished with heavier spinner baits or spoons.

Catching pike of any size is a lot of fun, but landing a big northern pike is one of the most exciting and adrenalin-filled moments a pike angler will ever experience.